Health of migrants and refugees


Framework for analysis of the social determinants of migrant health (adapted from Commission on the Social Determinants of Health, 2007)

Contemporary migration includes permanent, temporary, seasonal and circular movements, and ranges across a spectrum from forced to voluntary migration. While the percentage of international migrants relative to the global population has remained stable at around 2–3%, in the last few decades their total number has increased in line with the growth in the world’s population (International Organization for Migration, 2013). Approximately half of international migration is inter-regional (International Organization for Migration, 2014; Zimmerman et al., 2011).

Table 17.1 presents commonly identified migrant types and recent global estimates. Some estimates are imprecise because of limited data collection and the challenges of counting irregular migrants, such as victims of trafficking. Notably, there are nearly four times as many internal migrants as international migrants (International Organization for Migration, 2011).


Migrants often fit into multiple categories (such as ‘irregular’ and ‘trafficked’), and their migration status can change over time (for example, an ‘asylum seeker’ becomes a ‘refugee’). From a population health perspective, the most important distinction is often whether a migrant is regular/documented or irregular/undocumented. Migrants with irregular status comprise approximately 20% of the global migrant population, and typically are vulnerable to health risks and have limited access to services compared to those who travel via regular channels, such as skilled workers (Gushulak, 2000; Hugo, 2013). For some migration pathways women now have higher rates of mobility than men, particularly for low-skill labour opportunities including domestic work, sex industry work or factory work (Hugo, 2005; World Health Organization, 2010).

During the past decade, international migrant workers from Sri Lanka have increased tenfold and 17% of Sri Lanka’s labour force is currently working overseas. Women constitute approximately half of Sri Lanka’s migrant worker population. The majority are employed in domestic work, particularly in Middle East countries. Sri Lankan ‘housemaids’ working overseas experience high levels of exploitation, unpaid wages, breach of employment contracts, sexual harassment, physical and sexual harassment, rape and torture that can lead to disability or even death. Many Middle East countries do not provide adequate legal protection to migrant domestic workers. Kronfol, Saleh and Al-Ghafry (2014) present the case of a 28-year-old woman from Sri Lanka, working in Doha. Her husband in Sri Lanka was unhappy with her decision to migrate. She arrived in Doha in summer and worked in conditions of extreme heat (over 45°C). She was brought to an emergency department after overdosing on paracetamol and slitting her wrists. The woman said she wanted to end her life because of the pressure of her job and tensions with her husband. Her sponsor agreed to end her three-year contract but did not refund the money she paid for her travel. Sri Lanka now provides two-to-three week compulsory pre-departure orientation training for female housemaids with a focus on skills training, household management, language and general orientation. Recruitment agents supplement some of the training. Internationally, there are a growing number of bilateral agreements and memoranda of understanding that seek to protect the rights and wellbeing of migrant workers (Siriwardhana et al., 2015).

Consider the gender-related dimensions of health risks for some of the migrant categories listed in Table 17.1 above. What particular health risks might women migrants face, and why?

Health challenges and opportunities across stages of migration 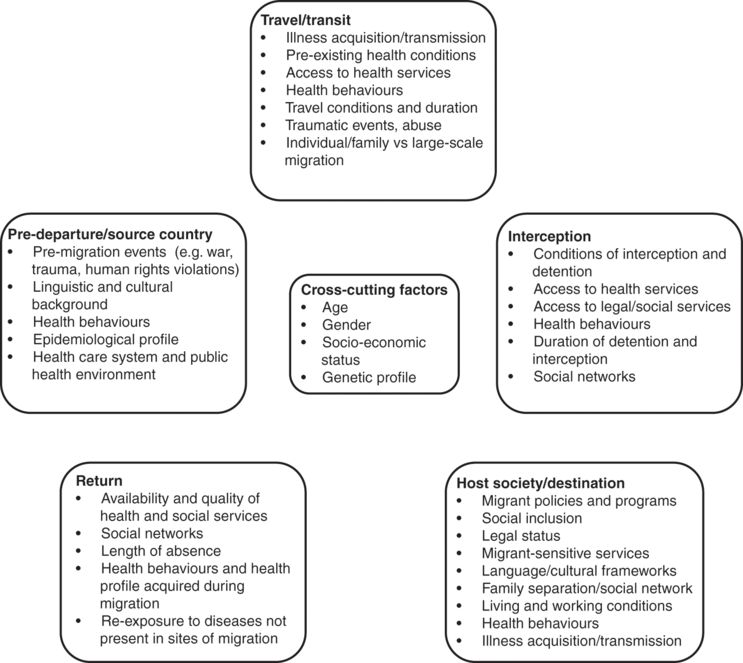 Prior to migration, many factors affect health, including local disease risks, socio-political and economic contexts (for example, poverty, housing, interpersonal violence), environmental factors (for example, drought, environmental resource availability), health risk behaviours, and access to health services. For example, Muslim Rohingya, a poor minority from Myanmar, have been seeking refuge for decades across the Thai and Bangladesh borders. In Myanmar, they have no civil rights; no protection from persecution by local Burmese, the police and military; are not allowed to travel without official permission; are banned from owning land; and are required to sign a commitment not to have more than two children. In 2012, riots in Rakhine State occurred between Rohingya Muslims and ethnic Rakhine: hundreds of people were killed and thousands forcibly displaced. In July 2012, the Myanmar Government decreed that the Rohingya have no claim to Myanmar citizenship. UNHCR estimates that almost 140 000 people are displaced in Rakhine State, and that over 800 000 people are without citizenship in the northern part, many in camps for internally displaced people (United Nations High Commissioner for Refugees, 2014). Among forced migrants in particular, pre-migration experiences are likely to have adverse impacts on psychological and physical health throughout the migration process (see Figure 17.2).

For regular migrants, the pre-departure phase can offer an important opportunity to deliver health promotion (Zimmerman et al., 2011). Several countries with large numbers of labour migrants, such as the Philippines and Sri Lanka, have developed health education programs for out-going migrants about health risks and health service entitlements. Most pre-departure health programs and policies, however, focus on transmissible infectious disease screening. For example, prior to arriving in Australia, humanitarian entrants undergo as part of the visa application process a visa medical, which may include a chest X-ray, HIV serology, syphilis serology, hepatitis B and C serology, as well as a medical examination. Mandatory HIV testing of refugees is controversial; UNHCR states that it contravenes human rights standards, does not prevent the introduction or spread of the disease, and can have a very significant impact on the lives of vulnerable refugees and their families (United Nations High Commissioner for Refugees, 2007). For successful humanitarian applicants, a departure health check approximately three days prior to leaving includes treatment for parasites and infections, an MMR (measles, mumps and rubella) vaccine and a rapid test for malaria (Victorian Foundation for Survivors of Torture, 2012).

a person who migrates via recognised and authorised channels.

The public health implications for those left behind have received little attention. While there are widely documented economic advantages for the families of many migrants, there is some evidence emerging around the social, psychological and health impacts for family members left behind. There is limited empirical evidence to support the assumption that children of migrants experience increased psychological problems compared to children of non-migrants (International Organization for Migration, 2008). Although sparse, there is some evidence that migration of adult children can negatively affect both mental and physical health of ageing parents, including due to their increased responsibilities to care for grandchildren. And some studies have shown that migrants’ spouses have increased physical and mental health problems, including depression. The health and social impacts of migration for ‘left behind’ populations require greater attention, in both policy and research (Siriwardhana et al., 2015).

Contemporary migration, particularly for irregular migrants, is rarely a linear process of movement from one country to another. Transit migration occurs as people move between places of origin and their planned destination, stopping for short periods or longer periods of up to several years or more (Zimmerman et al., 2011). Transit migration is a broad term, but is most widely applied to irregular migrants. Transit migration may include Mexicans who trek across the desert into the USA, Afghanis who flee via established smugglers’ routes through either Thailand or India to Malaysia and then by boat to Indonesia, or those who enter North Africa or countries bordering the European Union (EU) and then attempt cross the border to an EU country by boat, foot or hidden in containers or lorries. Irregular agents (‘smugglers’) can assist migrants for sections of the journey, such as across an individual border, or they determine and prepare the whole journey.

There are multiple health risks during transit, particularly for irregular migrants (see Figure 17.2):

Border regions are often sites with substantial population mobility. Migration within and through border regions may include migrant workers (both regular and irregular), refugees and ethnic minority groups. Globally, ‘border health’ is an area of emerging concern with a focus on both migrants and local border populations. Health risks in border regions emerge from health service access barriers, weak health systems, poor infrastructure, limited health referral and binational collaboration between neighbouring countries, limited access to effective treatment, poor treatment adherence, use of substandard medicines, and geographic isolation (Gushulak et al., 2010). Casual cross-border migration is significant in many countries in Asia, such as the movement of Cambodian, Burmese and Lao PDR low-skilled workers between their countries of origin and Thailand. Major communicable diseases such as malaria, tuberculosis (TB), sexually transmitted infections and HIV/AIDS, and diarrhoeal diseases have been reported in border areas in the Greater Mekong Subregion (Ministry of Public Health Thailand, 2011). Incomplete and inconsistent treatment of TB, malaria and HIV has increased the drug-resistant strains of these diseases, particularly among mobile populations in border areas where the use of counterfeit or substandard drugs is common (Ministry of Public Health Thailand, 2011).

Typically there are inadequate provisions for health services and resources for migrants in transit and border areas. However, some health initiatives have been established for migrants and transit populations in border regions. For example, the 2nd Thai Border Health Development Master Plan 2012–16 aims to improve the health of people in border areas (for example, Thais, ethnic minorities, registered and non-registered migrants, displaced people and asylum seekers) through the development of health service systems in border areas; improved access to primary health services; participation of relevant stakeholders, including community, public and international agencies; and an effective administration system to achieve the objectives of the border health work (Ministry of Public Health Thailand, 2011). The United States–Mexico Border Health Commission addresses public health concerns in the US–Mexico border region through bi-national collaboration. The ‘Healthy Border 2010’ agenda established 10-year objectives for bi-national public health promotion and disease prevention, including access to care, strategic planning, research and data collection and academic alliances, TB, obesity and diabetes, infectious disease, and public health emergencies (Border Health Commission, 2010).

Settlement refers to temporary, long-term or permanent settlement in an intended location. The overwhelming majority of migration health research has focused on this phase, usually describing migrant health in high-income migrant-receiving countries (for example, the USA, UK and Australia) (Zimmerman et al., 2011).

A large body of research in high-income countries has identified the ‘healthy migrant effect’, documenting a health advantage for migrants across multiple domains including mortality, birth weight, self-rated health, non-communicable disease (for example, obesity, hypertension, diabetes, cardiovascular diseases), teen pregnancy, suicide, and tobacco and alcohol use (Kandula, Kersey & Lurie, 2004). One area in which immigrants – particularly refugees and asylum seekers – may not enjoy an advantage is mental health (c.f. Steel et al., 2009). Although the process is poorly understood, the health advantage appears to dissipate over time (Delavari, Sonderlund, Swinburn, Mellor & Renzaho, 2013).

The health concerns for migrants living in low-income countries are less widely researched. Evidence suggests that migrants in developing countries carry a disproportionate burden of poor health because they live and work in poor conditions, have limited access to health services, experience poverty, lack health education and information, are often separated from family, and have low awareness of preventive health measures. For example, among migrants in low-income countries, TB transmission has been linked to poverty, poor housing, overcrowding, inadequate nutrition, exploitative working conditions, lack of information on transmission, emerging multi-drug resistant TB, limited TB control programs, lack of access to health facilities and rising HIV–TB co-infection (Hugo, 2013; International Organization for Migration, 2013). Some migrant workers in low-income settings – particularly female domestic and entertainment workers – are subject to violence and physical abuse, isolation and exploitative working condition, and experience adverse health impacts (Hugo, 2013). Many migrant workers are employed in dangerous sectors, such as fisheries, mining and construction, with increased risk of occupational accidents and injury. And migrants to urban poor communities (for example, Bangladeshis migrating from rural areas into the larges slums of Dhaka) are exposed to climate change-related impacts that present threats to health at, including water shortages, sea-level rise and flooding, and elevated rates of infectious disease such as dengue (Huq, Kovats, Reid & Satterthwaite, 2007; Banu, Hu, Guo, Hurst & Tong, 2014). It is not only the characteristics of the migrant and pre-migration experiences but also the conditions of reception and settlement in destination countries that are central determinants of migrant health.