The stomach is a muscular reservoir into which the meal enters after being swallowed. While limited digestion may begin in the oral cavity as a result of enzymes contained in saliva, the gastric juices represent the first significant source of digestive capacity. However, the digestive functions of the stomach are not necessary for assimilation of a mixed meal, and indeed, surgical removal of the majority of the stomach because of disease, or in an effort to treat morbid obesity, is not incompatible with adequate nutrition. However, some degree of gastric secretory function is critically required for the absorption of an essential vitamin, B12, and gastric acid may also be important in the absorption of dietary nonheme iron.

Gastric secretions also serve to sterilize the meal. Other than those receiving irradiated meals for medical reasons, humans may ingest significant quantities of microbes with their meals. This is particularly the case in developing countries, where sanitation is inadequate and many do not have access to clean food or water. However, assuming the microbial load ingested is not overwhelming, the secretions of the stomach can kill many of the microorganisms contained therein, and thus maintain the relative sterility of the small intestine.

The functions outlined in the previous section are subserved by a number of products secreted by the stomach (Table 3–1). The most characteristic secretory product of the stomach is hydrochloric acid, which is not secreted in such large quantities anywhere else in the body. The acidity of the gastric secretions begins the digestive process via simple hydrolysis. This acid also contributes to the ability of the gastric juices to sterilize the meal.


Enzymatic digestion of the meal also occurs as a result of gastric secretions. A proteolytic enzyme, pepsin, is secreted as an inactive precursor, pepsinogen, and auto-catalytically cleaved at the low pH existing in the stomach lumen to yield the catalytically active pepsin. Pepsin is specialized for its role in mediating protein digestion in the stomach by virtue of the fact that it exhibits optimum activity at low pH. The gastric juice also contains a lipolytic enzyme, lipase, which contributes to the initial digestion of triglycerides. Gastric juice also contains a 45 kDa protein synthesized by parietal cells, called intrinsic factor. This binds to vitamin B12, also known as cobalamin, and is required for the eventual absorption of this vitamin more distally in the intestine. Intrinsic factor is specialized for its role by being relatively resistant to degradation by acid and proteolytic enzymes.

The stomach also secretes products important in protecting the mucosa from the harsh effects of the luminal mixture of acid and enzymes. Throughout the stomach, the surface cells are covered with a layer of mucus. Mucus consists of a mixture of mucin glycoproteins, surface phospholipids that endow hydrophobic properties on the surface of the mucus layer, and water. The mucin molecules are cross-linked by disulfide bonds between adjacent molecules, and the oligosaccharides of these structures confer a highly viscoelastic structure that expands considerably upon hydration. The stability of this layer is additionally enhanced by the activity of small peptides, known as trefoil factors, which interact with the carbohydrate side chains of mucin molecules. Bicarbonate ions are also secreted into the base of this mucus layer, which may provide a mechanism whereby the gastric surface is protected from excessively low and potentially injurious pH, via simple neutralization. The mucus layer is considered to provide a substrate in which a pH gradient can be established.

Finally, the stomach secretes a number of products into the mucosa that play critical roles in regulating the secretory and motility functions of the stomach, including gastrin, histamine, and prostaglandins. The roles of these factors will be discussed in more detail later.

Functional Regions of the Stomach

The stomach is a muscular sac that is described as having a greater and lesser curvature. It lies between the esophagus and the duodenum, and is delimited by the lower esophageal sphincter, and the pylorus, respectively (Figure 1–5). The wall of the stomach contains thick vascular folds known as rugae, and at a microscopic level, the surface epithelium can be seen to be invaginated with a series of gastric pits. Each pit opens to four to five blind-ended gastric glands. The stomach can also be divided into three major regions by both structure and function. Most distally, the cardia represents approximately 5% of the gastric surface area, and is a transitional zone where the stratified squamous epithelium of the esophagus gives way to the columnar epithelium that lines the remainder of the stomach and intestinal tract. The fundus or body of the stomach contains approximately 75% of the gastric glands, which in this region are so-called oxyntic glands that consist of specialized cell types from which arise the characteristic secretions of the stomach (Figure 3–1). Finally, the antrum of the stomach, immediately proximal to the pylorus, contains glands that secrete gastrin, the primary regulator of postprandial gastric secretion. The antrum also fulfills important motility functions that will be described in Chapter 8. 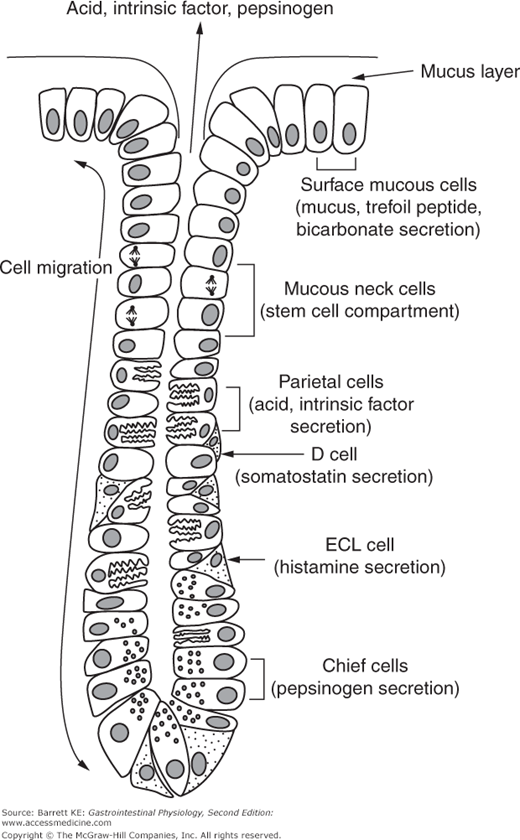 Structure of a gastric gland from the fundus and body of the stomach. These acid- and pepsinogen-producing glands are referred to as “oxyntic” glands in some sources.

The oxyntic, or parietal glands found in the gastric fundus contain a variety of specific cell types (Figure 3–1). The most notable are probably the parietal cells, which are specialized to secrete acid and intrinsic factor. More basally in the gland, there are chief cells, which store pepsinogen in apical granules that can release their contents via a process of exocytosis. The glands also contain endocrine cells that are responsible for releasing products that regulate gastric function, particularly the enterochromaffin-like, or ECL, cells, that synthesize histamine via the action of the enzyme histidine decarboxylase on the amino acid, histidine. The glands also contain D cells, which are closely opposed to the parietal cells and contain the inhibitory paracrine, somatostatin. Toward the top of the gland where it joins with the gastric pit, and moving out onto the gastric surface, the gland contains surface mucous cells that secrete mucus, as their name implies. In the isthmus and neck region of the gland lie the mucus neck cells, which are the precursors for all of the other differentiated cell types in the gland. These anchored stem cells give rise to daughter cells, which migrate downward to become parietal, chief, or endocrine cells, or upward to become surface mucous cells. The surface mucous cells turn over every 1–3 days in adult humans.

In the antral mucosa, the glands do not contain parietal or chief cells, but instead are comprised of both mucus-secreting cells and enteroendocrine cells that regulate gastric function. Particularly, the glands contain G cells, which synthesize and release gastrin across their basolateral poles, and which have an open morphology implying functionally significant communication with the gastric lumen. Closed endocrine cells are also present, exemplified by D cells.

The parietal cells are remarkable for their secretory capacity and energetic requirements. The capacity for acid secretion in a given individual is directly dependent on the mass of parietal cells. Parietal cell mass is related to body weight, and declines somewhat with age. These cells secrete acid against a concentration gradient of more than 2.5 million fold, from the cytoplasmic pH of 7.2 to a luminal pH of less than 1 when secretion is maximally activated. To sustain such massive rates of secretion, the parietal cell is packed with mitochondria, which are estimated to take up some 30–40% of the cell’s volume. The resting parietal cell also contains numerous membranous compartments known as tubulovesicles, as well as a central canaliculus that deeply invaginates the apical membrane (Figure 3–2). This morphology changes dramatically upon cell stimulation (Figure 3–3) as will be described more fully later. Interestingly, parietal cells also appear to provide signals that control the proliferation and differentiation of the other cell types involved in gastric physiology, and especially those of the chief cells. 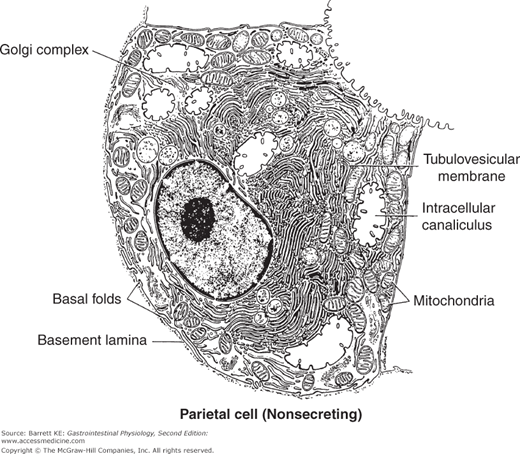 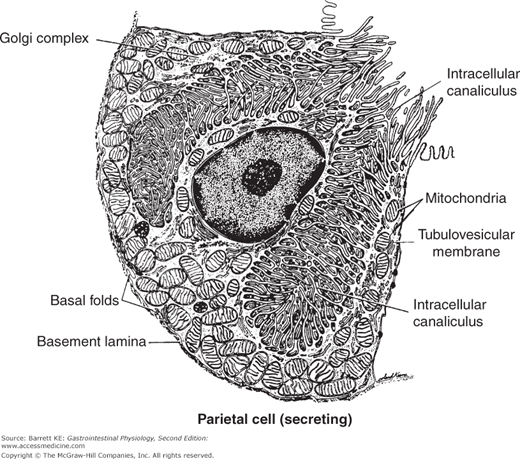 Ultrastructural appearance of a parietal cell during active secretion. The apical membrane is massively amplified by fusion of tubulovesicles and the secretory canaliculi. (Reproduced with permission from Ito. Functional gastric morphology. In: Johnson LR, ed. Physiology of the Gastrointestinal Tract. 2nd ed. New York: Raven Press; 1987.)

Nerves carried through the parasympathetic vagus nerve, with both efferent and afferent pathways, richly innervate the stomach. Vagal afferents convey information from the dorsal vagal complex, which is integrated with that coming from higher centers, such as the hypothalamus, to set the overall level of secretory function at any given moment. Visceral inputs also contribute to gastric regulation. Notably, the output of taste receptors travels to a brain region called the nucleus tractus solitarius, where this information is again translated into signals that regulate secretion and other gastric functions. A more modest amount of sympathetic innervation is also seen, and activation of sympathetic nerves tends to oppose the actions of the parasympathetic limb. Finally, the enteric nerve plexuses that are seen throughout the gastrointestinal tract encircle the walls of the stomach. These allow for some degree of autonomous function, in addition to transmitting effects of central input. Gastric sensory nerves containing the neurotransmitter calcitonin gene-related peptide (CGRP) are also present, and participate in down-regulation of acid secretion.

The dorsal vagal complex represents an important site where the various influences that can alter gastric secretion are integrated. It receives central input from the hypothalamus, as well as visceral input from the nucleus tractus solitarius. Taste fibers emanating from the oral cavity, and systemic hypoglycemia, represent visceral inputs that can lead to an increase in gastric secretion via vagal pathways originating in the dorsal vagal complex.

Control of the secretion of the characteristic products of the cell types lining the stomach represents a paradigm for control of gastrointestinal function as a whole. Thus, the secretory capacity of the stomach is closely integrated with signals coincident with the ingestion of a meal, and modulated as the meal moves through the gastrointestinal tract to provide optimum digestion. Furthermore, the physiological benefits of acid secretion must be balanced with its potential to cause epithelial damage and erosions. There are many mechanisms, therefore, whereby the function of the stomach is controlled.

Neural input provides an important mechanism for regulation of gastric secretion (Figure 3–4). Reflexes contribute to both the stimulation and inhibition of secretion. For example, distension of the stomach wall, sensed by stretch receptors, activates reflexes that stimulate acid secretion at the level of the parietal cell. These reflexes may be so-called short reflexes, which involve neural transmission contained entirely within the enteric nervous system. In addition, long reflexes also contribute to the control of secretion. These involve the activation of primary afferents that travel through the vagus nerve, which in turn are interpreted in the dorsal vagal complex and trigger vagal outflow via efferent nerves that travel back to the stomach and activate parietal cells or other components of the secretory machinery. These long reflexes are also called vago-vagal reflexes. The relative contribution of short and long reflexes to the control of secretion is unknown. However, it is clear that selective gastric vagotomy eliminates some, although not all, of the gastric secretory response to distension as well as a portion of related gastric motor responses. 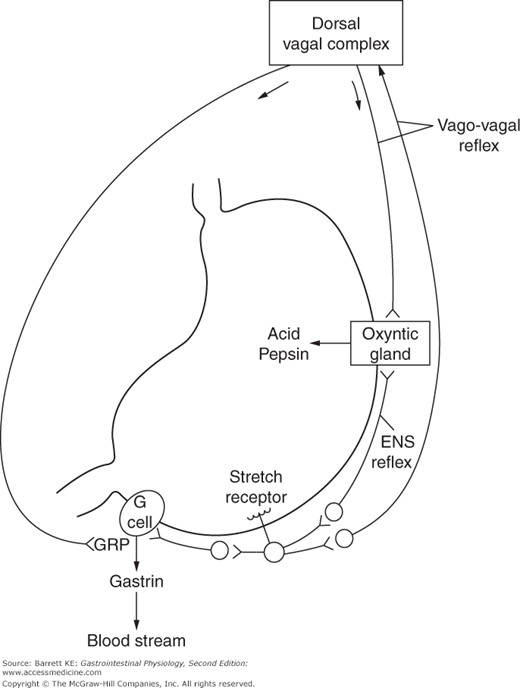 Neural regulation of gastric secretion in response to gastric distension. Stretch of the stomach wall increases acid secretion via both intrinsic reflexes and vago-vagal reflexes.