Water and Electrolyte Absorption and Secretion

The intestinal tract is designed primarily to permit assimilation of nutrients. Because chemical reactions are required to digest nutrients into components that can be absorbed across the intestinal epithelium, a fluid environment is needed to support these. Thus, control of the amount of fluid in the intestinal lumen is critical for normal intestinal function. This fluid environment permits contact of digestive enzymes with food particles, and in turn the diffusion of digested nutrients to their eventual site of absorption. The fluidity of the intestinal contents also provides for their transit along the length of the gastrointestinal tract without damage to the lining of the epithelium.

Thus, control of luminal fluidity is central to gastrointestinal function. In fact, large volumes of fluid are handled by the intestine on a daily basis in the course of digesting and absorbing meals. Although some of this fluid is derived from beverages and from the food itself, the majority is supplied by the intestine and the organs that drain into it. The daily fluid load can vary somewhat depending on the types of food and drink ingested, but in normal adults it approximates 9 liters (Figure 5–1). Obviously, in health, this large volume is not lost to the stool, but instead is reclaimed by the intestine to avoid dehydration. The majority of the fluid is reabsorbed in the small intestine in conjunction with nutrients, although the colon is more efficient in conserving fluid and takes up almost 90% of the fluid presented to it. Moreover, both the small and large intestines have a large reserve capacity for absorption, and it is only when this is exceeded that excessive water loss to the stool occurs, seen clinically as diarrhea. Finally, the intestine is not normally the major determinant of whole body fluid and electrolyte homeostasis, a physiological function that is relegated to the kidneys.

However, because large volumes of fluid can move into and out of the intestine, especially in disease states, abnormalities of fluid transport in the intestine have the potential to lead to serious derangements in body-fluid balances. 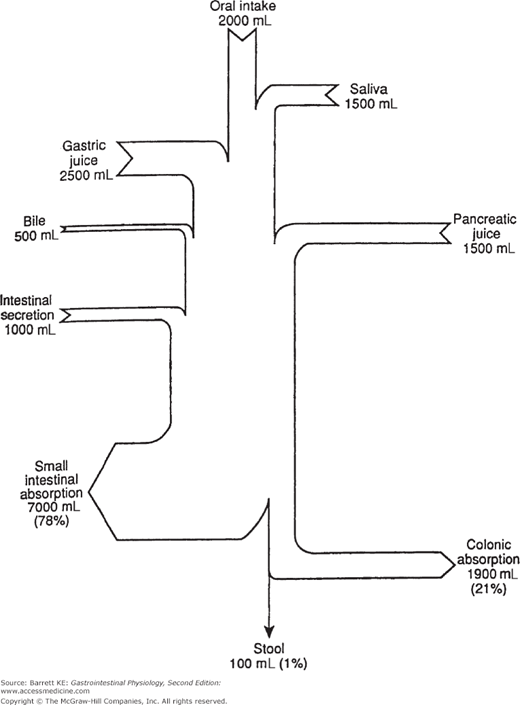 Daily water balance in the healthy adult human gastrointestinal tract. The amount of oral intake varies among individuals depending on the types of meals taken. Note that even in health there is a significant secretory flux of fluid from the intestine. (Used with permission from Barrett and Dharmsathaphorn. Transport of water and electrolytes in the gastrointestinal tract: physiological mechanisms, regulation and methods for study. In: Narins RG, ed. Maxwell and Kleeman’s Clinical Disorders of Fluid and Electrolyte Metabolism. 5th ed. New York; 1994.)

The site for control of intestinal fluid movement is the lining epithelium. Epithelial cells express several specialized properties that allow them to control fluid movement. Most important are the intracellular tight junctions, which restrict the passive flow of solutes and back-flow of these once either secreted or absorbed. In fact, despite the large volumes of fluid moved into and out of the intestinal tract, water is transported passively across the intestinal epithelium in response to osmotic gradients established by the active transport of electrolytes and other solutes. Moreover, there is limited evidence to suggest a major role for aquaporin water channels in mediating water movement in the intestinal epithelium, and instead water is believed to move around the epithelial cells, via the so-called paracellular route. Nevertheless, emerging evidence suggests that some water that is absorbed by the intestine may “piggy-back” on transport routes through epithelial cells (transcellular transport) by being carried along in the transporters that move other solutes, particularly in the absorptive direction. Nevertheless, no matter what the precise pathway for water movement, ultimately the epithelium must establish an appropriate osmotic vector to drive such transport.

The transport pathways that make up the transport mechanisms are of three types. Pumps utilize cellular energy to move ions against a concentration gradient, and are thus defined as active transporters. Channels, on the other hand, are high-capacity “pores” in the plasma membrane through which large numbers of ions can move passively when the channel is open, in response to prevailing electrochemical gradients. Finally, carriers move one or more ions against a concentration gradient by coupling their movement to that of another ion or ions whose transport is favored. Carriers may be either exchangers (the transported species move in opposite directions) or cotransporters (the transported species move in the same direction). Carriers are said to perform “secondary active transport”—while they are not intrinsically active transporters, they take advantage of electrochemical gradients established by other active pumps. Commonly, such secondary active transport pathways in the gut center on sodium ions, taking advantage of the low intracellular sodium concentration established by the basolateral sodium–potassium ATPase that is present in all intestinal epithelial cells.

Another principle that is important to remember about intestinal fluid transport is that both absorption and secretion can occur simultaneously in any given segment of the intestinal tract. This is apparently due, in large part, to the principle that the cells of the villi (or surface cells in the colon) are absorptive whereas crypt epithelial cells are secretory, although there are known to be some exceptions to this general rule. Moreover, the transport mechanisms that are expressed in the small intestine and colon differ, due to the relative paucity of nutrients in the latter segment (Tables 5–2 and 5–3). In general, absorptive mechanisms for fluid center on the active movement of sodium, with or without the coupled transport of chloride, nutrients, or other solutes such as bile acids. On the other hand, most secretory fluxes of the fluid in the intestine are driven by the electrogenic movement of chloride ions, although bicarbonate secretion may assume significance in particular segments of the gut, especially in the stomach and proximal duodenum where it plays an important role in protecting the mucosa from the injurious effects of acid and pepsin. Both secretion and absorption of small amounts of potassium also occur in the intestine, depending on whole-body potassium status, but these are not quantitatively significant in terms of associated water movement. Similarly, the intestine is a critical portal for absorption of calcium and iron needed for other body systems, but again, the quantities involved play only a very minor role in fluid uptake.

The capacity of the intestine for large volumes of water transport is related to its massively amplified surface area. In fact, the surface area of the adult small intestine alone exceeds that of a doubles tennis court. How can this surface area be accommodated within the body? The answer lies in the fact that the intestine is not a simple cylinder, but instead is amplified first by folds in the mucosa, then by the presence of crypts and villi, and finally by the presence of microvilli on the apical poles of individual epithelial cells, which increase the overall surface area by a factor of 20-fold. Overall, the surface area is increased by these physical structures by a factor of 600-fold. This amplification of the surface area not only allows for handling of the large volumes of fluids required for normal functioning of the intestine during digestion and absorption, but also provides a reserve capacity for fluid absorption in disease. However, the surface amplification, particularly in the crypts, also carries a liability in that there is a corresponding reserve capacity for intestinal fluid secretion. Almost all of us have some personal experience of the outcome when secretion is inappropriately stimulated and cannot be balanced by absorption! On a more serious note, if such secretion is extensive and prolonged, it can rapidly lead to serious dehydration if left untreated.

As we learned in earlier chapters, the intestinal epithelium rests on a lamina propria that is a rich source of potential regulatory factors. In addition to endocrine regulators supplied by local blood flow, epithelial functions, including electrolyte transport, are controlled by paracrine mediators supplied by local enteroendocrine cells, immune mediators coming from both resident (in health) and infiltrating (in disease) immune and inflammatory cell types, and neurocrines released from secretomotor efferent nerves originating predominantly in the submucosal plexus of the enteric nervous system. Immunologic effector cells that are known to influence epithelial transport include mast cells, neutrophils, and eosinophils. The epithelial cells themselves may also produce autocrine factors that regulate their transport function, such as growth factors and prostanoids.

The regulatory systems that mediate changes in epithelial transport do not act in isolation. Rather, there is significant cross-talk between the various modes of communication. For example, some immunologic mediators may have both direct effects on epithelial cells, and others that are mediated secondarily via the activation of enteric nerves. Cross-talk between the various regulatory systems also provides for coordinated regulation of transport and motility functions (Figure 5–2). 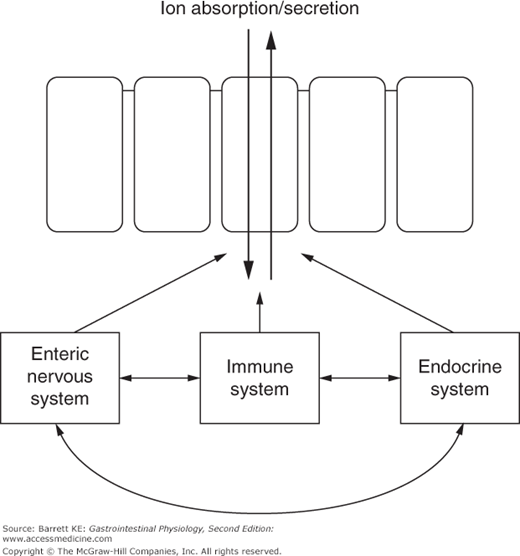 Regulation of intestinal ion transport. The balance between fluid and electrolyte absorption and secretion across the intestinal epithelium is regulated by an interplay between endocrine, neurocrine, and immune cell factors.

Regulation of Water and Electrolyte Transport

We turn now to a discussion of how transport responses are regulated to subserve physiological function. Much of our knowledge surrounding the control of intestinal fluid movement comes from studies of the factors that regulate fluid secretion, which is driven primarily by the secretion of chloride ions. In the postprandial period when nutrients are present in the small intestinal lumen, fluid absorption has been considered to be more of a passive response that is driven by the presence of these nutrients, and not highly subject to regulation by intra- and inter-cellular mechanisms. On the other hand, when the meal has been fully digested and absorbed, the intestine is still capable of ongoing fluid absorption to balance secretory pathways, and accomplishes this via the absorption solely of sodium and chloride ions, independent of nutrient uptake. Nutrient-independent solute uptake is also an important mechanism in the colon, where there are not usually significant quantities of nutrients, at least in health. The nutrient-independent pathways for fluid absorption are subject to both intra- and intercellular regulation. In general, regulatory pathways that stimulate chloride secretion inhibit electroneutral sodium chloride absorption, and vice versa. However, some of the intracellular pathways that stimulate chloride secretion, such as elevations in cAMP, may also stimulate electrogenic sodium absorption in the distal colon. Moreover, reciprocity also does not apply to nutrient-coupled absorption, which can continue unopposed even under circumstances that lead to the stimulation of chloride secretion. This last point underlies the efficacy of so-called oral rehydration solutions that are used to treat the dehydration accompanying severe diarrheal diseases, such as cholera, when intravenous fluids are not available. Glucose, or complex carbohydrates such as those in rice water, are added to an electrolyte solution and given orally. This mixture can drive fluid uptake even when chloride secretion is maximally stimulated and electroneutral NaCl absorption is blocked.