Functional Anatomy of the GI Tract and Organs Draining into It

Overview of the Gastrointestinal System and Its Functions

The gastrointestinal system primarily conveys nutrients, electrolytes, and water into the body. In unicellular organisms, metabolic requirements can be met by diffusion or transport of substances from the environment across the cell membrane. However, the greatly increased scale of multicellular organisms, along with the fact that most such organisms are terrestrial, and thus not normally swimming in a soup of nutrients, means that specialized systems have evolved to convey nutrients into and around the body. Thus, the gastrointestinal system and liver work in concert with the circulatory system to ensure that the nutritional requirements of cells distant from the exterior of the body can be met.

Most nutrients in a normal human diet are macromolecules and thus cannot readily permeate across cell membranes. Likewise, nutrients are not usually taken predominantly in the form of solutions, but rather as solid food. Thus, in addition to the physical process of food uptake, the intestines serve to physically reduce the meal into a suspension of small particles mixed with nutrients in solution. These are then chemically altered resulting in molecules capable of traversing the intestinal lining. These processes are referred to as digestion, and involve gastrointestinal motility as well as the influences of pH changes, biological detergents, and enzymes.

The final stage in the assimilation of a meal involves movement of digested nutrients out of the intestinal contents, across the intestinal lining, and into either the blood supply to the gut or the lymphatic system, for transfer to more distant sites in the body. Collectively, this directed movement of nutrients is referred to as absorption. The efficiency of absorption may vary widely for different molecules in the diet as well as those supplied via the oral route with therapeutic intent, such as drugs. The barriers to absorption encountered by a given nutrient will depend heavily on its physicochemical characteristics, and particularly on whether it is hydrophilic (such as the products of protein and carbohydrate digestion) or hydrophobic (such as dietary lipids). For the main substances vitally required by the body, the gastrointestinal tract does not rely solely on diffusion across the lining to provide for uptake, but rather has evolved active transport mechanisms that take up specific solutes with high efficiency.

There is significant excess capacity in the systems for both digestion and absorption of a meal, including an excess of enzymes and other secreted products as well as an excess in the surface area available for absorption in healthy individuals. Thus, assimilation of nutrients is highly efficient, assuming adequate amounts are presented to the lumen. In former times, this doubtlessly assisted our ancestors in surviving under circumstances where food was not always plentiful. On the other hand, in modern times, and in developed countries, this excess capacity for nutrient uptake may contribute to high rates of obesity.

The gastrointestinal system also serves as an important organ for excretion of substances out of the body. This excretory function extends not only to the obvious nonabsorbable residues of the meal, but also to specific classes of substances that cannot exit the body via other routes. Thus, in contrast to the excretory function of the renal system, which handles predominantly water-soluble metabolic waste products, the intestine works together with the biliary system to excrete hydrophobic molecules, such as cholesterol, steroids, and drug metabolites. As we will see later, the intestine also harbors a complex ecosystem of symbiotic bacteria known as commensals, even in the healthy state, and many members of this community die on a daily basis and are lost through the stool. Finally, the cells of the intestinal lining themselves turn over rapidly, and the stool also contains residues of these dead cells that are shed from the lining after their function has been fulfilled.

The intestine is a long tube, stretching from the mouth to the anus, whose inner surface exists in continuity with the exterior of the body. This, of course, is essential to its function of bringing nutrients from the environment into the body: however, this also implies that the intestine, like the skin, is a potential portal into the body for less desirable substances. Indeed, we exploit this property to deliver drugs via the oral route. In addition, the intestine is potentially vulnerable to infectious microorganisms that can enter the gut with the ingestion of food and water. To protect itself and the body, the intestine has evolved a sophisticated system of immune defenses. In fact, the gastrointestinal tract represents the largest lymphoid organ of the body, with significantly more lymphocytes than are found in the circulating immune system. The gastrointestinal immune system is also characterized by specific functional capabilities, most notably by being able to distinguish between “friend” and “foe,” mounting immune defenses against pathogens while being tolerant of dietary antigens and the beneficial commensal bacteria.

Given the functions of the gastrointestinal system discussed earlier, we turn now to a consideration of anatomic features needed to support these functions. In this discussion, the gastrointestinal system can be thought of as a machine (Figure 1–1) in which distinct portions conduct the various processes needed for assimilation of a meal without uptake of significant quantities of harmful substances or microorganisms. 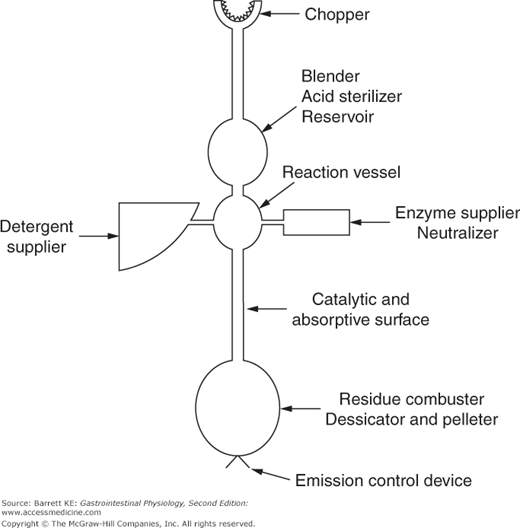 The gastrointestinal system as a machine that conducts digestive, absorptive, immune, and excretory functions. (Based on a figure originally designed by Alan F. Hofmann and used with permission.)

The gastrointestinal tract itself is a long muscular tube stretching from the mouth to the anus. Within the lining of this tube, blind-ended glandular structures invaginate into the wall of the gut and empty their secretions into the gut lumen, defined as the cavity within the intestine. At various points along the length of the gastrointestinal tract, more elaborate glandular organs are also attached to the intestine and are connected to the intestinal lumen via ducts, also allowing secretions to drain into the intestine where they can be mixed with intestinal contents. Examples of such organs include the pancreas and salivary glands. Glands in general can be considered as structures that convert raw materials from the bloodstream into physiologically useful secretions, such as acid and enzyme solutions. The function of these hollow organs is closely coordinated with that of the intestine itself to provide optimal processing of the meal following ingestion.

In general, the hollow organs that drain secretions into the gut have a common structure. Specialized secretory cells form structures known as acini where a primary secretion is produced at the blind end of the gland. Clusters of such acini, which can be likened to a bunch of grapes, then empty into tube-like ductular structures; with larger ducts collecting the secretions from a group of smaller ones until a main collecting duct is reached that connects directly into the gut lumen. The branching morphogenesis that results in these structures during development amplifies the functional surface area of the gland and its capacity for secretion. The liver, which will be considered in this volume as a critical participant in gastrointestinal function overall, has a highly specialized structure that will be discussed in detail in a later chapter. For now, it suffices to say that the liver is designed not only to secrete substances into the gastrointestinal lumen via the biliary system, but also to receive absorbed substances from the intestine that travel first to the liver via the portal circulation before being processed and then distributed to the body as a whole.

The tube that comprises the gastrointestinal tract is made up of functional layers comprised of specialized cell types (Figure 1–2). The first layer encountered by an ingested nutrient is the epithelium, which forms a continuous lining of the entire gastrointestinal tract as well as the lining of the glands and organs that drain into the tube. The epithelium is a critical contributor to intestinal function since it must provide for the selective uptake of nutrients, electrolytes, and water while rejecting harmful solutes. The surface area of the intestinal epithelium is amplified by being arranged into crypt and villus structures (Figure 1–3). The former are analogous to the glands discussed earlier, whereas villi are finger-like projections that protrude into the intestinal lumen and which are covered by epithelial cells. In the large intestine, only crypts are seen, interspersed with surface epithelium between the crypt openings. 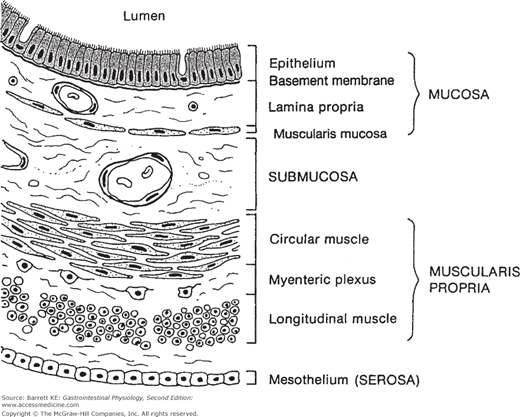 Organization of the wall of the intestine into functional layers. (Adapted from Madara and Anderson, in: Textbook of Gastroenterology. 4th ed. 151–165, copyright Lippincott Williams and Wilkins, 2003, and used with permission.) The submucosal plexus is not shown in this diagram (see Figure 1–8). 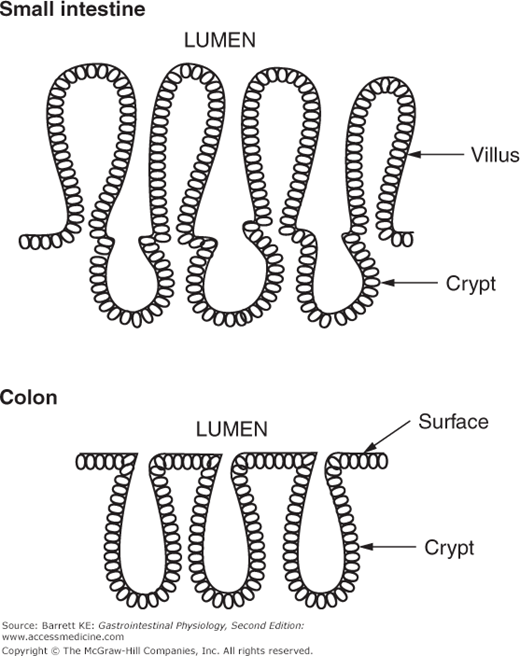 Comparison of the morphology of the epithelial layers of the small intestine and colon.

The majority of the gastrointestinal epithelium is columnar in nature, where a single layer of tall, cylindrical cells separates the gut lumen from the deeper layers of the wall of the gut. The structure of the columnar epithelium can be compared to a six-pack of soda cans, with the cans representing the cells and the plastic holder that links them as a series of intercellular junctions that provide a barrier to passive movement of solutes around the cells.

An exception to the rule that the gut epithelium is columnar in nature is found in the first part of the intestinal tube, known as the esophagus, where the epithelial lining is referred to as a stratified squamous epithelium. At this site, the epithelium forms a multilayer reminiscent of the structure of the skin, with cells migrating toward the lumen from a basal germinal layer.

Tags: Gastrointestinal Physiology 2e
Jun 11, 2016 | Posted by drzezo in PHYSIOLOGY | Comments Off on Functional Anatomy of the GI Tract and Organs Draining into It
Premium Wordpress Themes by UFO Themes
WordPress theme by UFO themes
%d bloggers like this: