Botulinum neurotoxin in the gastrointestinal tract

Fig. 32.1 Electromyography of the upper esophageal sphincter (UES). (a) Portable computer-assisted equipment. A 26-gauge concentric needle electrode of 50 mm length is inserted at the inferolateral aspect of the cricoid cartilage and rotated medially after insertion to record the cricopharyngeal muscle electrical activity. Subsequently, the electrode can be connected to a insulin syringe for injection of 4–10 U onabotulinumtoxinA. (b) Example of manometry demonstrating incomplete relaxation of the UES and raised intrabolus pressure at the pharyngeal level. Manometry should be combined with videofluoroscopy in the careful evaluation of UES dysfunction. (With permission from Zaninotto et al., 2004).

Cricopharyngeal muscle dysfunction has been traditionally treated with surgical myotomy, mechanical dilatation or plexus neurectomy. Localized injections of botulinum neurotoxin (BoNT) into the dorsomedial or ventrolateral parts of the muscle have also been successfully performed endoscopically, percutaneously (Fig. 32.1a) and eventually under CT or fluoroscopic control, with or without electromyographic (EMG) guidance (Fulmer et al., 2011). Unfortunately, there are no standards or guidelines and the administered dose reported ranges widely between 10 and 120 U onabotulinumtoxinA, usually selected on the basis of symptom severity.

Local injections are relatively simple, safe (complication rate about 7%) and effective, although the effect wanes after 4–6 months (Fulmer et al., 2011). Injection in the horizontal part of the muscle and an adequate (i.e. high enough) starting dose are predictors of greater efficacy. The BoNT can be used as part of the diagnostic evaluation to ascertain the role of cricopharyngeal spasm in a patient’s symptoms; moreover, it may help to identify those patients who are more likely to benefit from surgical myotomy.

Paradoxically, BoNT can cause transient oropharyngeal dysphagia as a complication of local injections for cervical and oromandibular dystonia.

Achalasia is a rare neuromuscular disorder of the esophagus characterized by loss of peristalsis and failure of the lower esophageal sphincter (LES) to relax normally. This results in functional obstruction with retention of food and saliva in the lumen, and subsequent risk of aspiration, malnutrition and weight loss. The etiology is unknown but the early pathological changes consist of a myenteric plexus inflammation with subsequent loss of ganglion cells and fibrosis. Degenerative changes of the vagal nerves and dorsal vagal nuclei have also been described. The impairment of LES relaxation and peristaltic propagation of contractions is caused by selective loss of inhibitory nerve endings releasing the neurotransmitters nitric oxide and vasoactive intestinal polypeptide. Conversely, the excitatory cholinergic pathway is preserved and may lead to increased resting LES pressure.

Current therapies are aimed to mechanically reduce LES tone through pneumatic dilatation or surgical myotomy. Both procedures, although effective in the large majority of patients (65 to 90%), carry a significant risk of complications: a 2% rate of perforation and reduced efficacy over time (about 50%) for dilatation and a 10–30% risk of gastroesophageal reflux after myotomy (Pehlivanov and Pasricha, 2006). The functional results, particularly for myotomy, are largely influenced by the surgeon’s experience.

These limitations prompted Pasricha and colleagues in 1994 to assess, for the first time, the usefulness of intrasphincteric injection of BoNT. The rationale behind this was that the selective loss of the inhibitory nerves in achalasia upset the excitatory (cholinergic) influences on the LES. By blocking acetylcholine release, locally injected BoNT might reduce LES pressure and improve esophageal emptying. The efficacy of this treatment modality has been evaluated in a number of uncontrolled and controlled trials, also comparing its cost–effectiveness with dilatation and surgical myotomy (Annese and Bassotti, 2006; Leyden et al., 2006). The BoNT is injected through a standard sclerotherapy needle during upper gastrointestinal endoscopy under conscious sedation with 80–100 U onabotulinumtoxinA/incobotulinumtoxinA (or 250 U abobotulinumtoxinA)(Annese et al., 1999) injected in each quadrant of the LES at four or eight (preferred) sites in 1 or 0.5 ml portions (Fig. 32.2). Injections of BoNT via endoscopic fundic retroversion or endoscopic ultrasonography do not enhance efficacy. 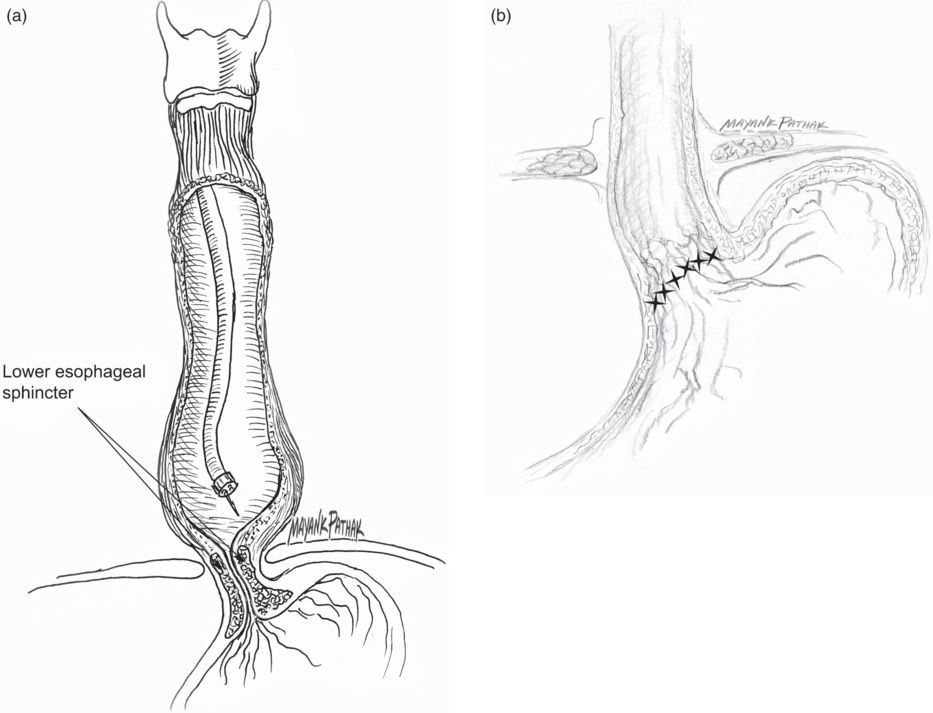 Fig. 32.2 Esophageal achalasia. (a) Botulinum neurotoxin is injected during a standard endoscopy with conscious sedation, through a sclerotherapy needle (23-gauge); 100 U onabotulinumtoxinA or 250 U abobotulinumtoxinA diluted in 4 ml is delivered in four or (preferably) eight radial sites starting at the Z-line and 1 cm above. (b) Following the injection, the pressure of lower esophageal sphincter is reduced and the esophagus empties by gravity. In the early stages of disease, this also allows reduction of esophageal diameter.

Although BoNT injection is remarkably safe, (about 10% of patients report a mild chest pain) and effective in the short term (70–90%) (Annese and Bassotti, 2006; Leyden et al., 2006), there are a number of limitations: (1) the mean duration of efficacy is 1 year or less, although single patients with prolonged benefit (3–4 years) have been reported; (2) after repeated injections, a decline of efficacy (antibody formation?) has been reported; and (3) repeated BoNT injections may increase the difficulty of a subsequent surgical myotomy, although functional results seem similar (Leyden et al., 2006). The use of BoNT is currently recommended in poor candidates for surgery, old and very old patients or as temporizing measure (Pehlivanov and Pasricha, 2006). A potential benefit of BoNT prior to pneumatic dilatation has been suggested but not adequately proven.

Diffuse esophageal spasm is a rare esophageal motility disorder characterized by a severe reduction of esophageal peristalsis, often accompanied by prolonged and high-amplitude esophageal contractions and impaired LES relaxation. Isolated LES hypertension is another infrequent motility disorder, usually characterized by normal esophageal peristalsis and LES relaxation. The etiology for both disorders is unknown but deranged function of the myenteric plexus is suspected. The major symptom for both disorders is chest pain, with or without concurrent dysphagia. No satisfactory pharmacologic therapy is available, and rarely a surgical myotomy is required. Moreover, pneumatic dilatation is usually poorly effective for the chest pain. A therapeutic role of BoNT has been reported in the literature, although in limited case series and uncontrolled observations (Bashashati et al., 2010). For LES hypertension, the treatment technique used for achalasia has been employed, while in patients with diffuse esophageal spasm, multiple injections along the esophageal wall are suggested, beginning at the LES region and moving proximally at 1–2 cm intervals into endoscopically visible contraction rings (Fig. 32.3) (Bashashati et al., 2010).

Fig. 32.3 In patients with diffuse esophageal spasm, the same amount of neurotoxin is delivered half at the level of the lower esophageal sphincter and half 5 cm proximally to reduce the strength of esophageal contractions.

Preliminary studies on animals demonstrated that locally injected BoNT significantly reduces the sphincter wave amplitudes and phasic contractile activity, probably through selective inhibition of cholinergic influences. In this setting, two potential uses of BoNT could be hypothesized: first, intrasphincteric injection may serve as a simple test to identify patients whose pain is really caused by sphincter of Oddi dysfunction. Second, once efficacy is established, BoNT may prove to be an effective and safer therapeutic modality than sphincterotomy (Murray, 2011). The technique is rather simple, consisting of a single injection into the major papilla of 100 U BoNT with a sclerotherapy needle (Fig. 32.4). However, controlled and prospective studies are lacking. 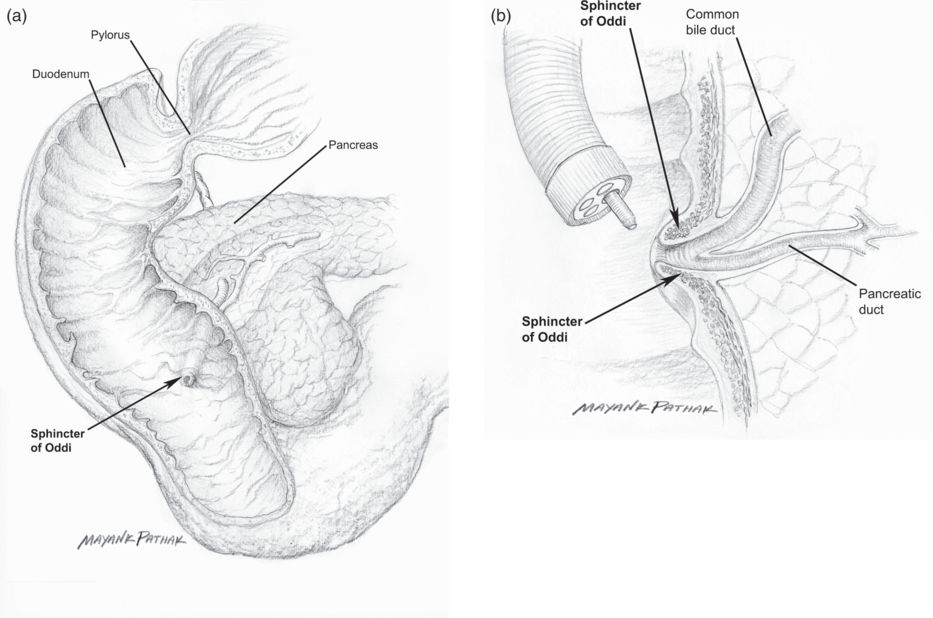 Fig. 32.4 Sphincter of Oddi dysfunction (demonstrated by biliary manometry and/or colangio-magnetic nuclear resonance imaging plus secretin stimulation). (a) The position of the sphincter of Oddi. (b) Toxin is delivered with a side view endoscope through a sclerotherapy needle at the papilla.