Note the overall structure of the income statement: Revenue−Expense = Net income.
Each month the accountant updates the income statement and the two most senior partners review the numbers.
Case: Mountain Pathology Income Statement II
For March (Fig. 7.2), the two senior partners identified five areas (yellow) of potential concern or opportunity to review with the accountant. 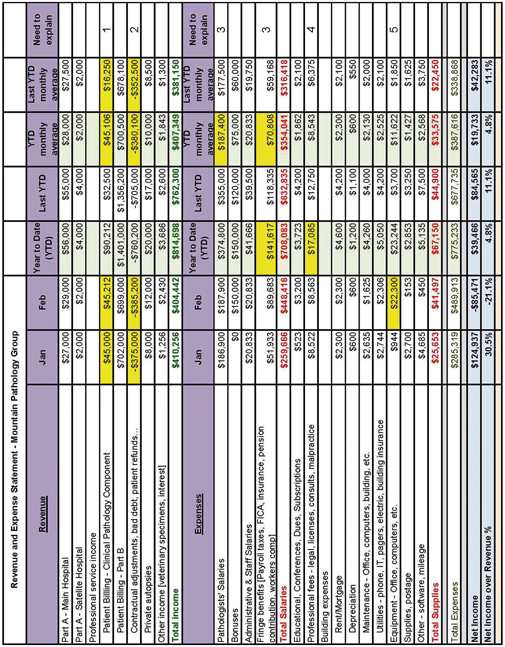 Although the practice could have been billing for the professional component of clinical pathology (CPC), they had not been. Billing for CPC began in January of the previous fiscal year and revenue began rising in January and February. A year into CPC billing, collections are much higher.
2.

Contractual adjustments are the differences between billed amounts for services and money collected. For example, the list price of an 88305 (Current Procedural Terminology (CPT) code for a typical diagnostic biopsy) is higher than the Medicare rate or rates contracted with insurance companies. The use of higher rates maximizes income by ensuring a billed rate above what an insurance company may pay (you do not want to leave anything on the table), but has the perverse effect of billing very large amounts to patients with no insurance, many of whom cannot pay despite being responsible for a relatively high bill. Higher rates also result in higher contractual adjustments. For Mountain Pathology Group, contracts were renegotiated and the negotiations were not as successful as in past years. The contractual rates dropped. Additionally, Medicare re-evaluated two of the most used CPT codes and decreased their reimbursement rate.
3.

Since the practice’s profit margin was high last year, pathologists were given raises. Fringe benefits rose a corresponding amount plus the increased fringe benefit cost reflects rising rates for the group-provided health insurance.
4.

The renegotiation of contracts required some additional legal advice.
5.

The company computers in the offices needed to be upgraded or replaced in order to handle a new operating system.
Overall, Mountain Pathology Group is doing well. Thanks to the institution of professional component billing in clinical pathology, their revenue is well ahead year-over-year. The group is showing significant net income on a month-to-month basis that will be available for bonuses, which could be paid out at any time. Typically, independent pathology groups will pay out substantially all net income by year’s end to avoid paying taxes on the group’s profits. Of course, taxes would then be paid by the recipients of the bonuses when they file their individual tax returns.
Only gold members can continue reading. Log In or Register to continue