Celiac disease is a chronic, small intestinal immune-mediated enteropathy caused by intolerance to gluten found in wheat, barley, rye, and other foods when a genetically predisposed person is exposed to the environmental trigger, gluten.

Celiac disease affects 1 in 100 to 120 adults and 1 in 80 to 300 children in the North American population and appears to be increasing in prevalence.

The integrity of the tissue junctions of the intestinal epithelium is compromised in patients with celiac disease; this enables gluten to reach the lamina propria. The presence of gluten in the lamina propria and an inherited combination of genes contribute to the heightened immune sensitivity to gluten that is found in patients with celiac disease.

The classic presenting symptom in adults is diarrhea, which may be accompanied by abdominal pain or discomfort; however, it is noteworthy that during the past decade diarrhea has been reported as the main presenting symptom of celiac disease in less than 50% of cases.

A confirmed diagnosis of celiac disease requires both positive findings on duodenal biopsy and a positive response to a gluten-free diet. The most common serologic markers that are used for screening patients are serum anti–tissue transglutaminase antibodies and serum immunoglobulin A (IgA) endomysial antibodies.

Strict, lifelong adherence to a gluten-free diet is the only treatment for celiac disease that is currently available.

Clinicians must evaluate the patient with celiac disease for nutritional deficiencies (including folic acid, vitamin B12, fat-soluble vitamins, iron, and calcium) due to malabsorption. Iron-deficiency anemia may be the only presenting sign of disease in patients without diarrhea.

Celiac disease is a small intestinal immune-mediated enteropathy caused by intolerance to ingested gluten, a storage protein found in wheat, barley, and rye. Genetic, environmental, and immune factors all play a role in the development of celiac disease. The mainstay of treatment of the disease is strict, lifelong adherence to a gluten-free diet.1,2

Celiac disease has also been known as celiac sprue, nontropical sprue, and gluten-sensitive enteropathy; however, these terms are currently not recommended. The disease is characterized by both GI and extraintestinal symptoms. Chronic inflammation caused by exposure to gluten leads to GI discomfort, nutrient malabsorption, and systemic complications. GI symptoms, including diarrhea, cramping, bloating, and flatulence, are the “classic” symptoms; however, a patient with celiac disease may initially present with a variety of extraintestinal symptoms. Patients with subclinical celiac disease have no or minimal symptoms but manifest mucosal damage on biopsy and have positive serologic testing. Patients with celiac disease classified as potential are asymptomatic patients who may show positive serology and have the human leukocyte antigen (HLA)-DQ2 and/or DQ8 haplotype, but have normal mucosa on biopsy.1,4

Adherence to a gluten-free diet is essential because it improves symptoms and prevents long-term complications of celiac disease, which include T-cell lymphomas, small bowel adenocarcinoma, and esophageal and oropharyngeal carcinomas.5

Celiac disease has been less well studied in other parts of the world. Previously believed to rarely occur in nonwhite populations, improved screening and diagnostic techniques now provide evidence that the prevalence of celiac disease in many non-Western nations is similar to that in Europe and North America.10,11 In addition, in Asian countries where rice has traditionally been a staple, meals with rice are increasingly being replaced by a Western-style wheat-based diet. This transition in dietary preferences may lead to an increased prevalence of the disease in those populations.12

Celiac disease is known to occur when a genetically predisposed person ingests gluten. Wheat gluten proteins exist in two fractions: gliadins and glutenins. Storage proteins similar to glutenins, called hordeins and secalins, are found in barley and rye, respectively. Table 27-1 refers to grains and other foods that do and do not contain gluten and related proteins. Ingestion of any of these proteins will lead to an autoimmune response in celiac disease patients.

It is still a matter of controversy whether or not oats are safe for consumption by patients with celiac disease. Wheat, barley, and rye, which contain the disease-activating proteins gliadin, hordein, and secalin, respectively, are all derived from the Triticeae tribe of the grass (Gramineae) family. Oats, from the Aveneae tribe, are distantly related and therefore only contain few disease-activating proteins.13 Another concern with oats is that they may be contaminated with gluten during the manufacturing process.14 Gluten-free uncontaminated oats are now commercially available. Although a small number of individuals with celiac disease may not tolerate even pure, uncontaminated oats, clinical evidence has confirmed that the consumption of 50 to 70 g (1/2 to 3/4 cup [120 to 180 mL] dry certified gluten-free oats) is safe in adults with celiac disease.14 It has raised concern that some celiac disease patients are found to have avenin-reactive T cells that can cause mucosal inflammation.15 Investigators examined nine different cultivars of oats and found some to be more toxic than others regardless of their purity, leading them to conclude that some oats may trigger a greater immunologic response than others.16 Although the consumption of limited quantities of oats is generally considered to be acceptable, clinical followup of celiac disease patients who consume oats is advisable even if these patients are maintaining a strict gluten-free diet.14,15

Genetic factors, in combination with exposure to gluten, are necessary for the development of celiac disease. A concordance rate of 85% in monozygotic twins has been reported, indicating that genetics play a large role in the disease, but other factors are likely also involved.17,18

Virtually all patients with celiac disease have variants of HLA-DQ2 or HLA-DQ8 molecules that are expressed on the surface of antigen-presenting cells.19 Other non-HLA genes may also play a role in enhancing genetic susceptibility to celiac disease.18

Certain infectious agents and other compounds may contribute to the development of celiac disease. Both adenovirus and hepatitis C viruses are thought to act as triggers, whereas other agents, including Campylobacter jejuni, Giardia lamblia, rotavirus, and enterovirus infections, have been described in case reports as associated with celiac disease.20 The biologic agent interferon-α has also been suggested to play a role in celiac disease development.21

During normal digestion, peptides that remain from gastric or pancreatic digestion are broken down into amino acids, dipeptides, or tripeptides by the small intestinal brush-border membrane enzymes.23 These GI proteases that are found in the intestinal lumen are one of the body’s first defenses against potentially toxic dietary proteins.6 The intestinal epithelium, with its intact intercellular tight junctions, functions as the primary barrier to the passage of macromolecules into the lamina propria. Gluten is unusually rich in the amino acids glutamine and proline, which enable part of the molecule to withstand the digestive processes. These peptides are kept within the GI tract and are primarily excreted before they can illicit an immune reaction. Small fractions of gluten do cross this important defense barrier in patients without celiac disease; however, the quantity of gluten that passes across the GI lining is generally insufficient to illicit a significant response from a normally functioning immune system.24,25

Events likely associated with the pathophysiology of celiac disease have been characterized as an interaction between gluten and immune, genetic, and environmental factors.26 In celiac disease, the integrity of the tissue junctions of the intestinal epithelium is compromised, enabling gluten to reach the lamina propria through different routes. The presence of gluten in the lamina propria and an inherited combination of genes contribute to the heightened immune sensitivity to gluten found in patients with celiac disease (Table 27-2).24,25 The notable immune response to gluten consists of both adaptive and innate immune responses that occur only in individuals who carry the HLA type DQ2 or in some populations DQ8.27 The precise mechanism by which the immune system leads to damage of the intestinal lining of patients with celiac disease continues to be studied. 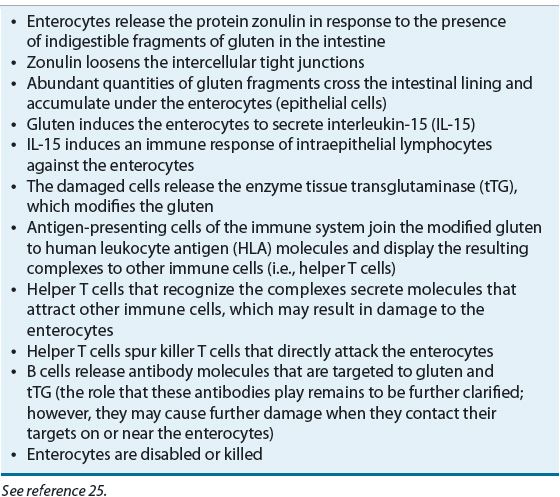 The primary toxic components of wheat gluten are a family of closely related proteins called gliadins.23 The gliadin peptides induce changes in the epithelium through innate immunity and in the lamina propria through adaptive immunity.18 Researchers have concluded that protected transport of gliadin peptides occurs in patients with celiac disease via a CD71-mediated transcytosis of immunoglobulin A (IgA)/gliadin peptides immune complexes from the lumen of the intestine to the lamina propria. In patients without celiac disease, the gliadin peptides are entirely degraded by lysosomal acid proteases during intestinal transcytosis. The abnormal expression of the IgA receptor CD71 at the apical side of the enterocytes that is found in celiac disease patients allows a protected retrotransport of serum immunoglobulin A (SIgA) gliadin immune complexes that could play an important role in triggering the immune activation that is characteristic of celiac disease. These researchers note that the normal function of SIgA (i.e., the containment of harmful antigens in the intestinal lumen) is deficient in celiac disease. They further state that the fate of the immune complexes once absorbed is unknown; however, the complexes may bind to IgA receptors that are present on local antigen-presenting cells and trigger the activation of local memory CD4+ T cells, which will perpetuate the inflammation.28

Tissue transglutaminase (tTG), a ubiquitous enzyme that catalyzes posttranslational modification of proteins and is released during inflammation, may play at least two crucial roles in celiac disease by serving as the main target autoantigen for antiendomysial enzymes and as a deaminating enzyme that raises the immunostimulatory effect of gluten. Expression and activity of tTG are raised in the mucosa of patients with celiac disease.6 This enzyme, by deaminating glutamine to glutamic acid, makes the gliadin peptides become negatively charged and therefore more capable of fitting into pockets of the HLA-DQ2 (or HLA-DQ8) antigen-binding groove on the antigen-presenting cells.6,26 Gliadin is presented to gliadin-reactive CD4+ T cells through a T-cell receptor, which then results in the production of cytokines that cause tissue damage. This then leads to villous atrophy, crypt hyperplasia, and the expansion of antibody-producing B cells found in celiac disease.26

The recognition of celiac disease may be quite challenging due to the wide range of presenting symptoms, which includes patients who are asymptomatic.6 Clinical manifestations of celiac disease also significantly vary according to age group (Table 27-3). Infants and young children generally experience diarrhea, abdominal distention, and failure to thrive. Vomiting, irritability, anorexia, and even constipation are also common in these young patients. Extraintestinal manifestations such as short stature, neurologic findings (e.g., peripheral neuropathy, ataxia, seizure, migraine, and dementia30), or anemia are often found in older children and adolescents. The classic presenting symptom in adults is diarrhea, which may be accompanied by abdominal pain or discomfort; however, it is noteworthy that during the past decade diarrhea has been reported as the main presenting symptom of celiac disease in less than 50% of cases. Adults may exhibit what are sometimes characterized as silent manifestations of this disease such as iron-deficiency anemia or osteoporosis. Less common but important presentations of celiac disease in adults include abdominal pain, constipation, weight loss, neurologic symptoms, dermatitis herpetiformis, hypoproteinemia, hypocalcemia, and elevated liver enzymes. Some adults may be diagnosed as a result of having an endoscopy performed in response to their complaints of symptoms associated with gastroesophageal reflux.26 Prior to age 65 years, the disease is two to three times more common in adult women than in adult men.6 Regrettably, patients with celiac disease often experience symptoms for a long period of time and may experience multiple hospitalizations and undergo surgical procedures before celiac disease is diagnosed.26

< div class='tao-gold-member'>
Only gold members can continue reading. Log In or Register to continue