Bilirubin Formation and Excretion by the Liver

Bilirubin is a metabolite of heme, a compound that serves to coordinate iron in various proteins. Very recently, bilirubin has been shown to possess important functions as an antioxidant, but it also serves simply as a means to excrete unwanted heme, derived from various heme-containing proteins such as hemoglobin, myoglobin, and various P450 enzymes. Bilirubin and its metabolites are also notable for the fact that they provide color to the bile and stool, as well as, to a lesser extent, the urine.

It is important for the body to be able to excrete bilirubin as it is potentially toxic. As we will discuss at the end of this chapter, certain disease states that involve excessive levels of bilirubin in the bloodstream can lead to accumulation of bilirubin in the brain due to its ability to cross the blood–brain barrier, a condition known as kernicterus (meaning “yellow-stained nucleus”). The development of this condition impairs brain function by mechanisms that are not well-understood, but it can be fatal if left untreated. Bilirubin is also notable for its yellow coloration. Accumulation of this substance in the blood is the basis for jaundice, or a yellow discoloration of the skin and eyes which is a common symptom of liver diseases. Thus, measurement of bilirubin in the plasma can be a useful marker of such conditions.

Pathways of Bilirubin Synthesis and Metabolism

Bilirubin derives from two main sources. The majority (80%) of the bilirubin formed in the body comes from the heme released from senescent red blood cells. The remainder originates from various heme-containing proteins found in other tissues, notably the liver and muscles.

Bilirubin is produced by a two-stage reaction that occurs in cells of the reticuloendothelial system, including phagocytes, the Kupffer cells of the liver, and cells in the spleen and bone marrow. Heme is taken up into these cells and acted on by the enzyme heme oxygenase, liberating the chelated iron from the heme structure and releasing an equimolar amount of carbon monoxide, which is excreted via the lungs. The reaction yields a green pigment known as biliverdin (Figure 13–1). Biliverdin is then acted on by the enzyme biliverdin reductase, again releasing a molecule of carbon monoxide and producing the yellow bilirubin. Although it contains two propionic acid side chains, the structure of bilirubin is highly compacted by hydrogen bonding. This renders the molecule essentially insoluble in aqueous solutions at neutral pH. 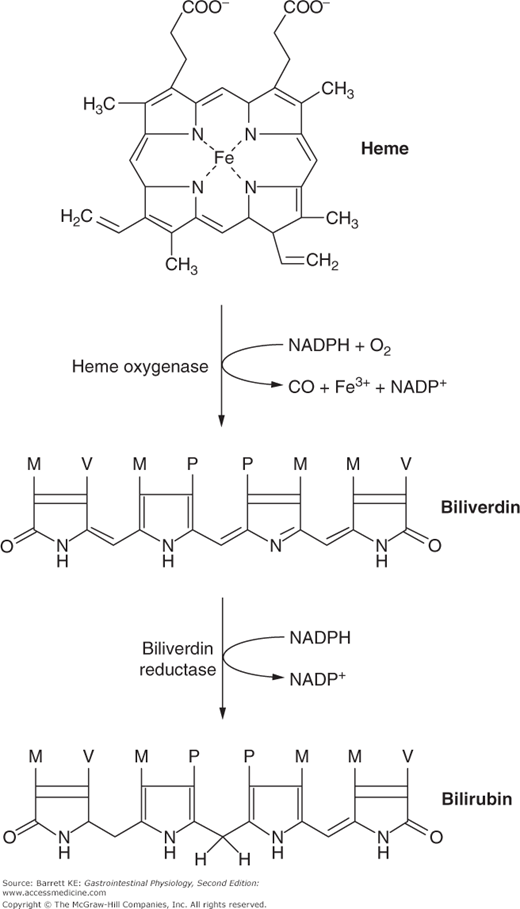 Bilirubin is released into the plasma and is taken up by albumin, which serves to transport this molecule throughout the body. The binding affinity of this unconjugated bilirubin for albumin is extremely high, and under normal conditions, there is essentially no free unconjugated bilirubin in the plasma. When the bilirubin-laden albumin reaches the liver, the high permeability of the hepatic microcirculation, as discussed in Chapter 10, allows the complex to enter the space of Disse such that it encounters the basolateral aspect of hepatocytes. At this site, bilirubin is taken up by a specific transport mechanism to enter the hepatocyte. However, this process is relatively inefficient, with the first pass clearance of bilirubin being approximately 20%. As a result, there is always a measurable concentration of unconjugated bilirubin, bound to albumin, in the venous circulation leaving the liver.

The transporters responsible for uptake of unconjugated bilirubin into the hepatocyte are not fully understood, and uptake may not require a protein carrier given bilirubin’s lipid solubility. However, there is some evidence to suggest its uptake may be mediated in part by the 1A and 1B members of the organic anion transporting polypeptide (OATP) family (Figure 13–2). These transporters may also take up any conjugated bilirubin that refluxes to the plasma. Once inside the hepatocyte, bilirubin requires special handling to maintain its solubility and traffic it appropriately. Thus, it is believed to be bound to a variety of intracellular proteins, including fatty acid binding proteins, that direct the molecule to the microsomal compartment for conjugation, as we will discuss later. These proteins are likely also responsible for vectorial transport of the conjugated bilirubin to the canalicular membrane for transport into the bile. 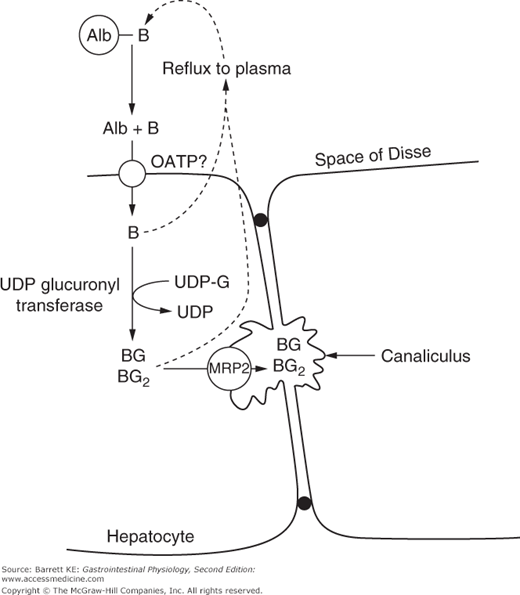 Following its conjugation, bilirubin exits the hepatocyte into the bile via a member of the ATP-binding cassette family of membrane transport proteins known as MRP2. While this transporter has a relatively broad specificity, transporting additional metabolic products as well as some drug conjugates, it appears that its main physiological substrate is conjugated bilirubin. Insights into the role and significance of this transporter have been gained from a genetic disorder known as Dubin–Johnson syndrome, which will be discussed in more detail later. However, even in health, transport of either unconjugated or conjugated bilirubin through the hepatocyte cytosol is not entirely efficient, and some escapes back into the plasma where it binds once more to albumin and can be transported around the body. On the other hand, only conjugated bilirubin is able to enter the bile via MRP2. It is primarily present in the aqueous fraction of the bile and is not believed to associate to any significant extent with the mixed micelles formed by the biliary lipids. Conjugated bilirubin is also neither further metabolized nor absorbed during its passage along the biliary tree.

Tags: Gastrointestinal Physiology 2e
Jun 11, 2016 | Posted by drzezo in PHYSIOLOGY | Comments Off on Bilirubin Formation and Excretion by the Liver
Premium Wordpress Themes by UFO Themes
WordPress theme by UFO themes
%d bloggers like this: