Figure 5-1. Qualitative and semi-quantitative representation of receptor binding properties. Throughout this chapter, the receptor binding properties of the atypical antipsychotics are represented both graphically and semi-quantitatively. Each drug is represented as a blue sphere, with its most potent binding properties depicted along the outer edge of the sphere. Additionally, each drug has a series of colored boxes associated with it. Each colored box represents a different binding property, and binding strength is indicated by the size of the box and the number of plus signs. Within the colored box series for any particular antipsychotic, larger boxes with more plus signs (positioned to the left) indicate stronger binding affinity, while smaller boxes with fewer plus signs (positioned to the right) represent weaker binding affinity. The series of boxes associated with each drug are arranged such that the size and positioning of a box reflect the binding potency for a particular receptor. The vertical dotted line cuts through the dopamine 2 (D2) receptor binding box, with binding properties that are more potent than D2 on the left and those that are less potent than D2 on the right. All binding properties are based on the mean values of published Ki (binding affinity) data (pdsp.med.unc.edu). The semi-quantitative depiction used throughout this chapter provides a quick visual reference of how strongly a particular drug binds to a particular receptor. It also allows for easy comparison of a drug’s binding properties with those of other atypical antipsychotics.

What makes an antipsychotic “conventional”?

Table 5-1 Some conventional antipsychotics still in use

Early in the testing process, chlorpromazine and other antipsychotic agents were all found to cause “neurolepsis,” known as an extreme form of slowness or absence of motor movements as well as behavioral indifference in experimental animals. The original antipsychotics were first discovered largely by their ability to produce this effect in experimental animals, and are thus sometimes called “neuroleptics.” A human counterpart of neurolepsis is also caused by these original (i.e., conventional) antipsychotic drugs and is characterized by psychomotor slowing, emotional quieting, and affective indifference.

By the 1970s it was widely recognized that the key pharmacologic property of all “neuroleptics” with antipsychotic properties was their ability to block dopamine D2 receptors (Figure 5-2). This action has proven to be responsible not only for the antipsychotic efficacy of conventional antipsychotic drugs, but also for most of their undesirable side effects, including “neurolepsis.” 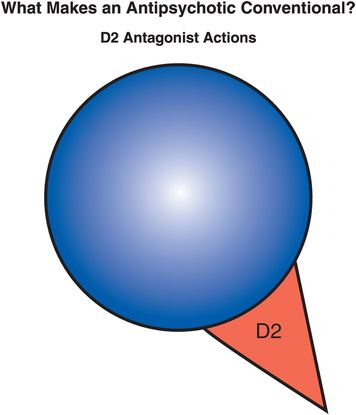 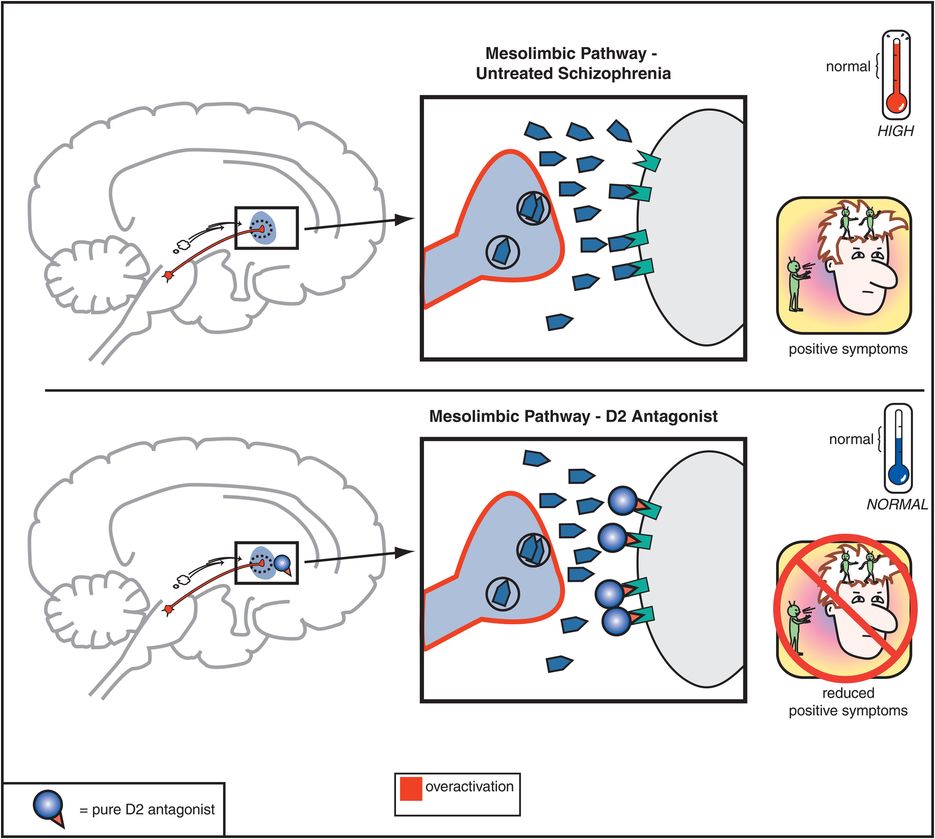 Figure 5-3. Mesolimbic dopamine pathway and D2 antagonists. In untreated schizophrenia, the mesolimbic dopamine pathway is hypothesized to be hyperactive, indicated here by the pathway appearing red as well as by the excess dopamine in the synapse. This leads to positive symptoms such as delusions and hallucinations. Administration of a D2 antagonist, such as a conventional antipsychotic, blocks dopamine from binding to the D2 receptor, which reduces hyperactivity in this pathway and thereby reduces positive symptoms as well. 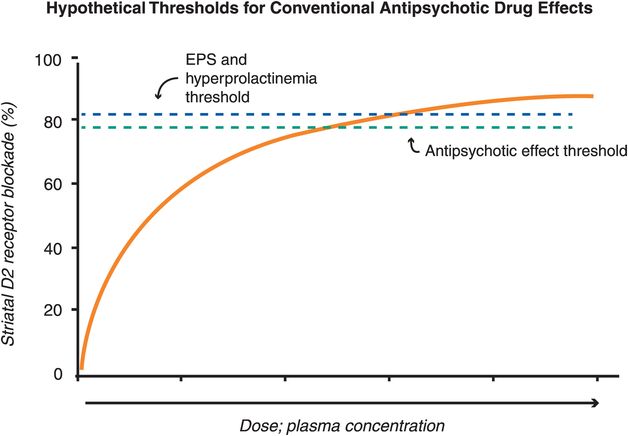 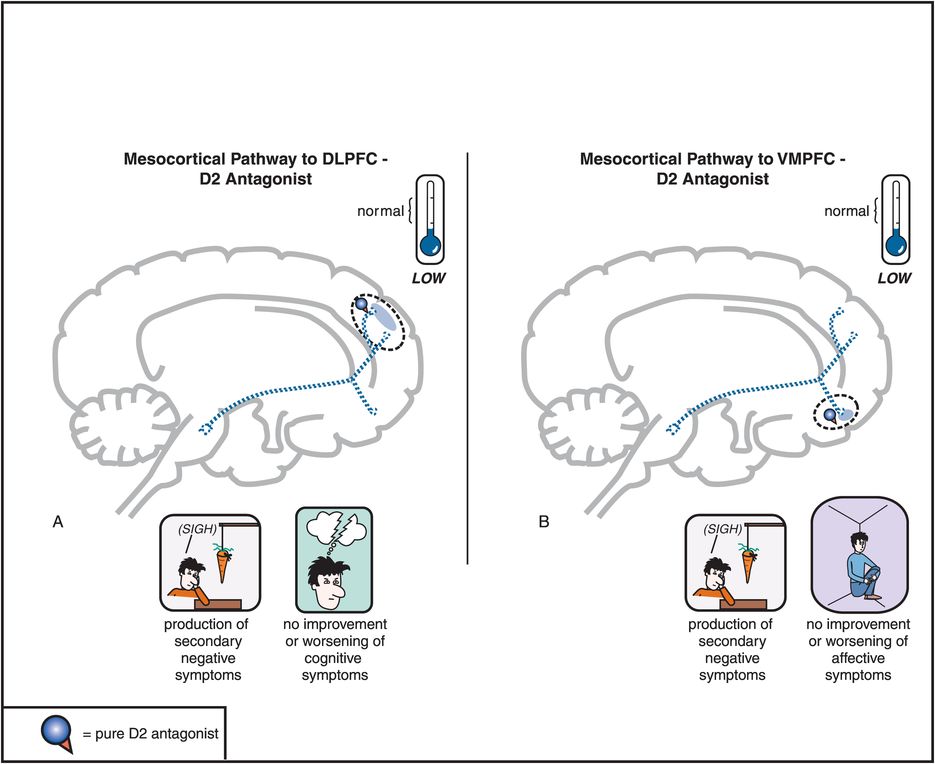 Figure 5-5. Mesocortical dopamine pathway and D2 antagonists. In untreated schizophrenia, the mesocortical dopamine pathways to dorsolateral prefrontal cortex (DLPFC) and to ventromedial prefrontal cortex (VMPFC) are hypothesized to be hypoactive, indicated here by the dotted outlines of the pathway. This hypoactivity is related to cognitive symptoms (in the DLPFC), negative symptoms (in the DLPFC and VMPFC), and affective symptoms of schizophrenia (in the VMPFC). Administration of a D2 antagonist could further reduce activity in this pathway and thus not only not improve such symptoms but actually potentially worsen them. 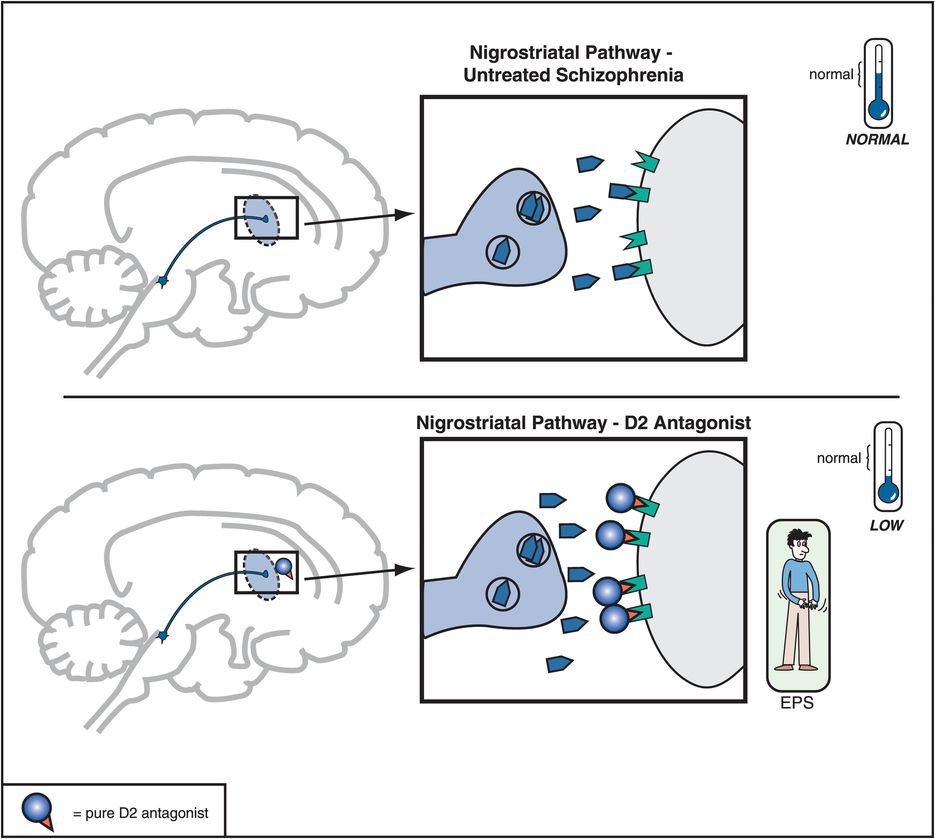 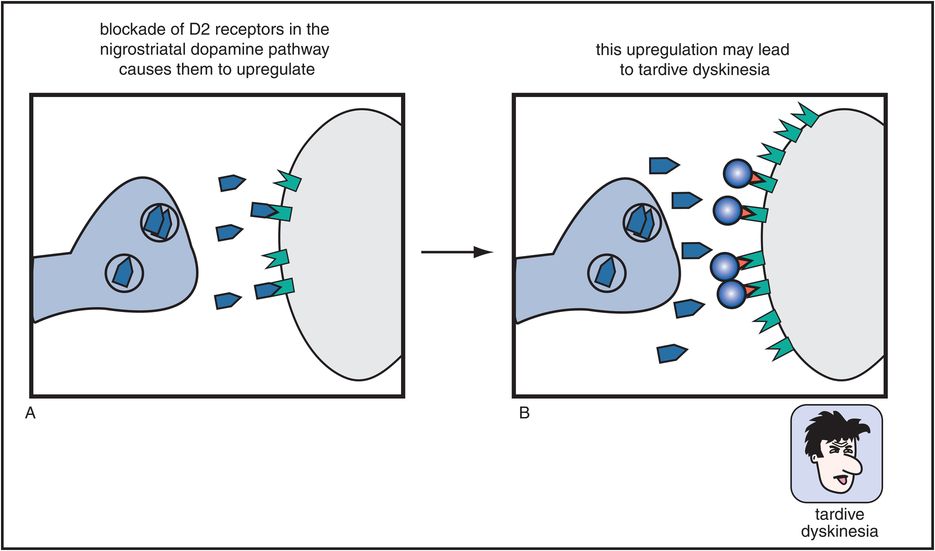 Figure 5-7. Tardive dyskinesia. Long-term blockade of D2 receptors in the nigrostriatal dopamine pathway can cause upregulation of those receptors, which may lead to a hyperkinetic motor condition known as tardive dyskinesia, characterized by facial and tongue movements (e.g., tongue protrusions, facial grimaces, chewing) as well as quick, jerky limb movements. This upregulation may be the consequence of the neuron’s futile attempt to overcome drug-induced blockade of its dopamine receptors. 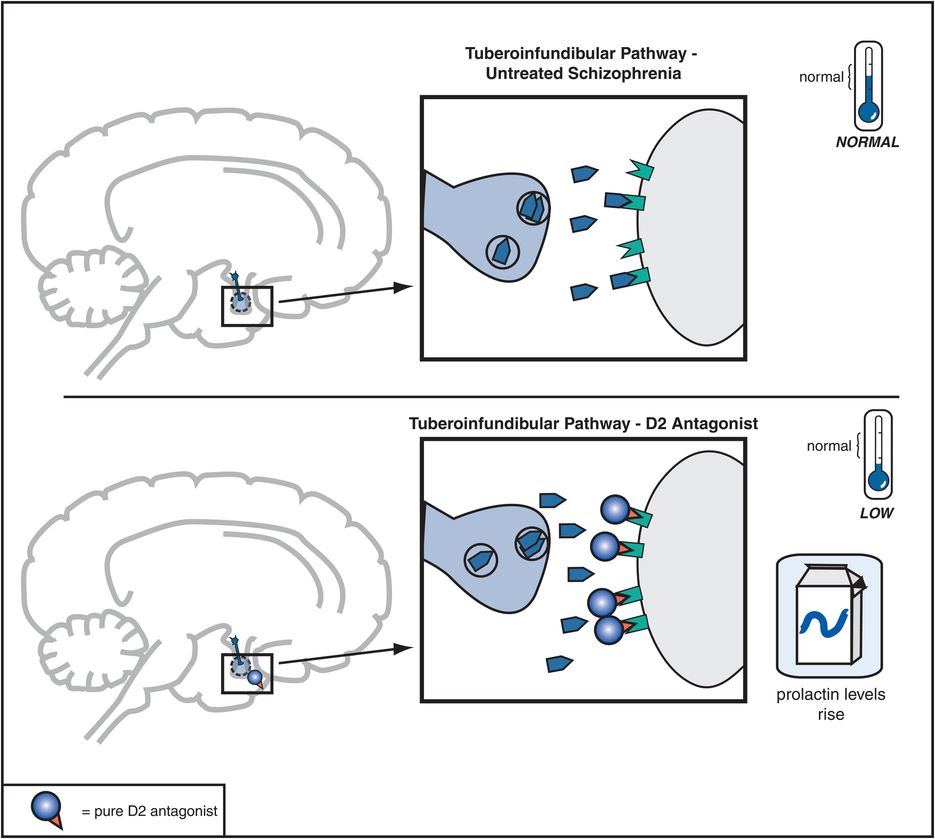 Figure 5-8. Tuberoinfundibular dopamine pathway and D2 antagonists. The tuberoinfundibular dopamine pathway, which projects from the hypothalamus to the pituitary gland, is theoretically “normal” in untreated schizophrenia. D2 antagonists reduce activity in this pathway by preventing dopamine from binding to D2 receptors. This causes prolactin levels to rise, which is associated with side effects such as galactorrhea (breast secretions) and amenorrhea (irregular menstrual periods).

D2 receptors in the mesolimbic dopamine system are postulated to mediate not only the positive symptoms of psychosis, but also the normal reward system of the brain, and the nucleus accumbens is widely considered to be the “pleasure center” of the brain. It may be the final common pathway of all reward and reinforcement, including not only normal reward (such as the pleasure of eating good food, orgasm, listening to music) but also the artificial reward of substance abuse. If D2 receptors are stimulated in some parts of the mesolimbic pathway, this can lead to the experience of pleasure. Thus, if D2 receptors in the mesolimbic system are blocked, this may not only reduce positive symptoms of schizophrenia, but also block reward mechanisms, leaving patients apathetic, anhedonic, lacking motivation, interest, and joy from social interactions, a state very similar to that of negative symptoms of schizophrenia. The near shutdown of the mesolimbic dopamine pathway necessary to improve the positive symptoms of psychosis (Figure 5-4) may contribute to worsening of anhedonia, apathy, and negative symptoms, and this may be a partial explanation for the high incidence of smoking and drug abuse in schizophrenia.

Antipsychotics also block D2 receptors in the mesocortical DA pathway (Figure 5-5), where DA may already be deficient in schizophrenia (see Figures 4-14 through 4-16). This can cause or worsen negative and cognitive symptoms even though there is only a low density of D2 receptors in the cortex. An adverse behavioral state can be produced by conventional antipsychotics, and is sometimes called the “neuroleptic-induced deficit syndrome” because it looks so much like the negative symptoms produced by schizophrenia itself, and is reminiscent of “neurolepsis” in animals.

When a substantial number of D2 receptors are blocked in the nigrostriatal DA pathway, this will produce various disorders of movement that can appear very much like those in Parkinson’s disease; this is why these movements are sometimes called drug-induced parkinsonism. Since the nigrostriatal pathway is part of the extrapyramidal nervous system, these motor side effects associated with blocking D2 receptors in this part of the brain are sometimes also called extrapyramidal symptoms, or EPS (Figures 5-4 and 5-6).

Worse yet, if these D2 receptors in the nigrostriatal DA pathway are blocked chronically (Figure 5-7), they can produce a hyperkinetic movement disorder known as tardive dyskinesia. This movement disorder causes facial and tongue movements, such as constant chewing, tongue protrusions, facial grimacing, and also limb movements that can be quick, jerky, or choreiform (dancing). Tardive dyskinesia is thus caused by long-term administration of conventional antipsychotics and is thought to be mediated by changes, sometimes irreversible, in the D2 receptors of the nigrostriatal DA pathway. Specifically, these receptors are hypothesized to become supersensitive or to “upregulate” (i.e., increase in number), perhaps in a futile attempt to overcome drug-induced blockade of D2 receptors in the striatum (Figure 5-7).

A rare but potentially fatal complication called the “neuroleptic malignant syndrome,” associated with extreme muscular rigidity, high fevers, coma, and even death, and possibly related in part to D2 receptor blockade in the nigrostriatal pathway, can also occur with conventional antipsychotic agents.

Dopamine D2 receptors in the tuberoinfundibular DA pathway are also blocked by conventional antipsychotics, and this causes plasma prolactin concentrations to rise, a condition called hyperprolactinemia (Figure 5-8). This is associated with conditions called galactorrhea (i.e., breast secretions) and amenorrhea (i.e., irregular or lack of menstrual periods). Hyperprolactinemia may thus interfere with fertility, especially in women. Hyperprolactinemia might lead to more rapid demineralization of bones, especially in postmenopausal women who are not taking estrogen replacement therapy. Other possible problems associated with elevated prolactin levels may include sexual dysfunction and weight gain, although the role of prolactin in causing such problems is not clear.

The dilemma of blocking D2 dopamine receptors in all dopamine pathways 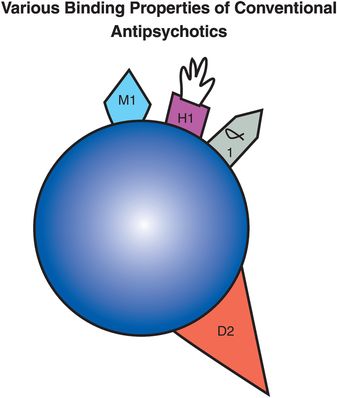 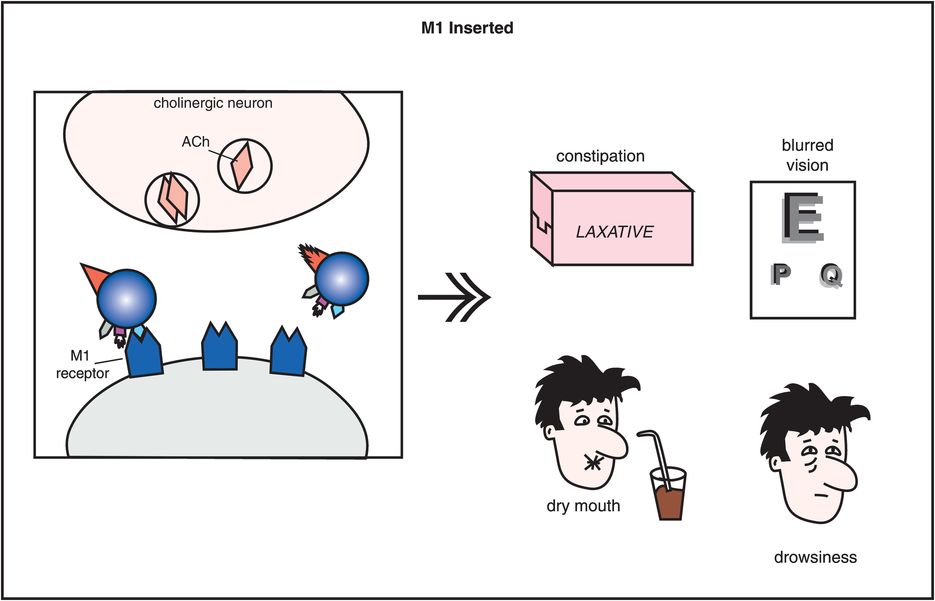 Figure 5-10. Side effects of muscarinic cholinergic receptor blockade. In this diagram, the icon of a conventional antipsychotic drug is shown with its M1 anticholinergic/antimuscarinic portion inserted into acetylcholine receptors, causing the side effects of constipation, blurred vision, dry mouth, and drowsiness. 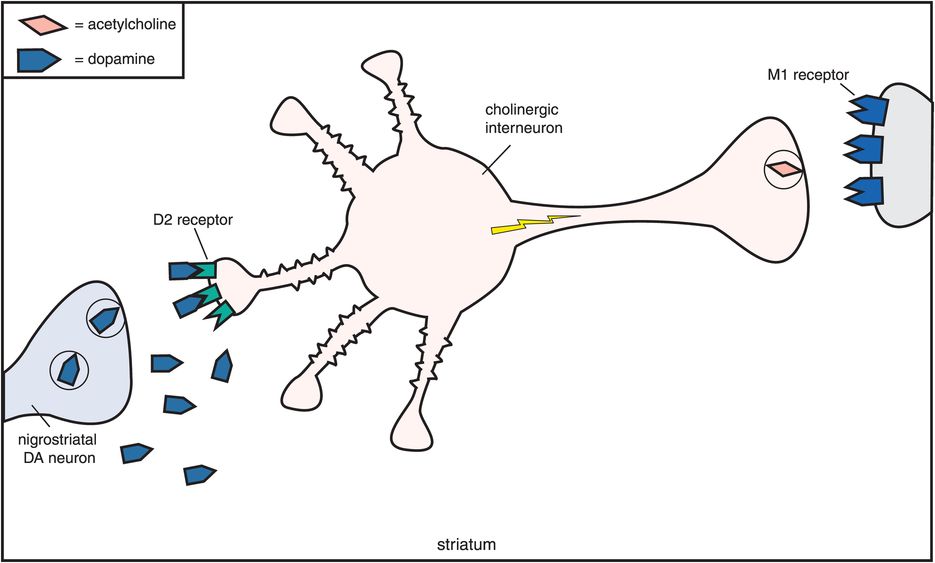 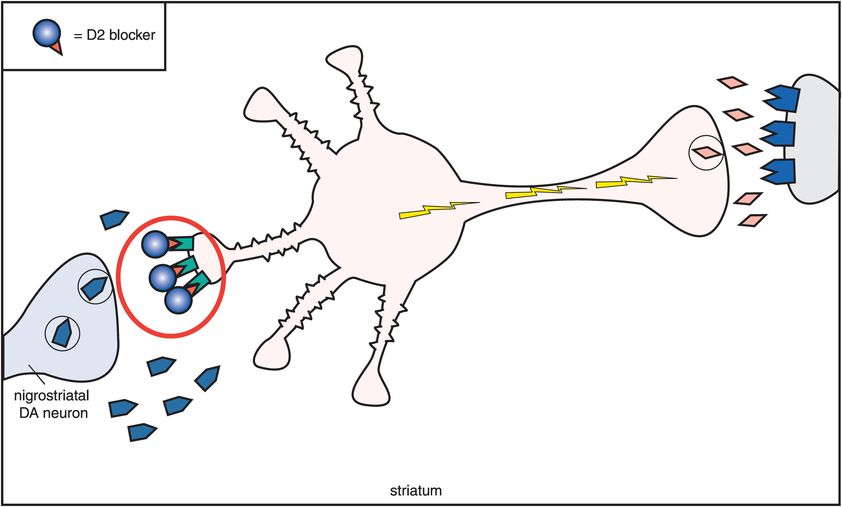 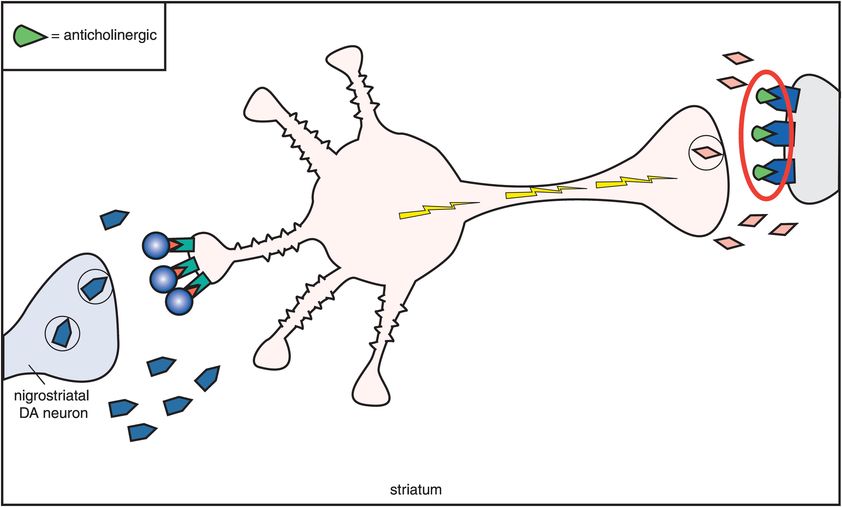 What makes an antipsychotic “atypical”? 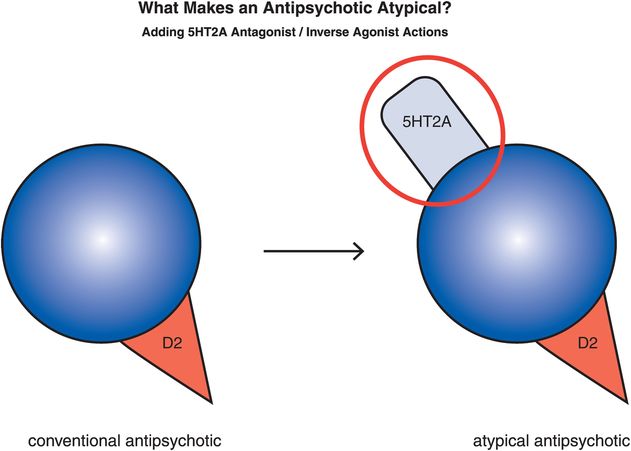 Figure 5-12. Serotonin–dopamine antagonist. The “atypicality” of atypical antipsychotics has often been attributed to the coupling of D2 antagonism with serotonin 5HT2A antagonism. On the right is an icon representing this dual pharmacological action.

Serotonin synthesis and termination of action

Serotonin is also known as 5-hydroxytryptamine and abbreviated as 5HT. Synthesis of 5HT begins with the amino acid tryptophan, which is transported into the brain from the plasma to serve as the 5HT precursor (Figure 5-13). Two synthetic enzymes then convert tryptophan into serotonin: firstly tryptophan hydroxylase (TRY-OH) converts tryptophan into 5-hydroxytryptophan, and then aromatic amino acid decarboxylase (AAADC) converts 5HTP into 5HT (Figure 5-13). After synthesis, 5HT is taken up into synaptic vesicles by a vesicular monoamine transporter (VMAT2) and stored there until it is used during neurotransmission. 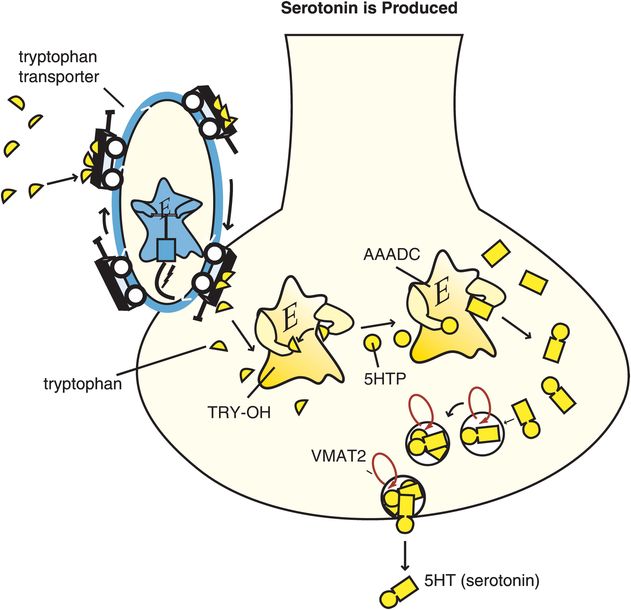 5HT action is terminated when it is enzymatically destroyed by monoamine oxidase (MAO), and converted into an inactive metabolite (Figure 5-14). Serotonergic neurons themselves contain MAO-B, which has low affinity for 5HT, so much of 5HT is thought to be enzymatically degraded by MAO-A outside of the neuron once 5HT is released. The 5HT neuron also has a presynaptic transport pump for serotonin called the serotonin transporter (SERT) that is unique for 5HT and that terminates serotonin’s actions by pumping it out of the synapse and back into the presynaptic nerve terminal where it can be re-stored in synaptic vesicles for subsequent use in another neurotransmission (Figure 5-14). 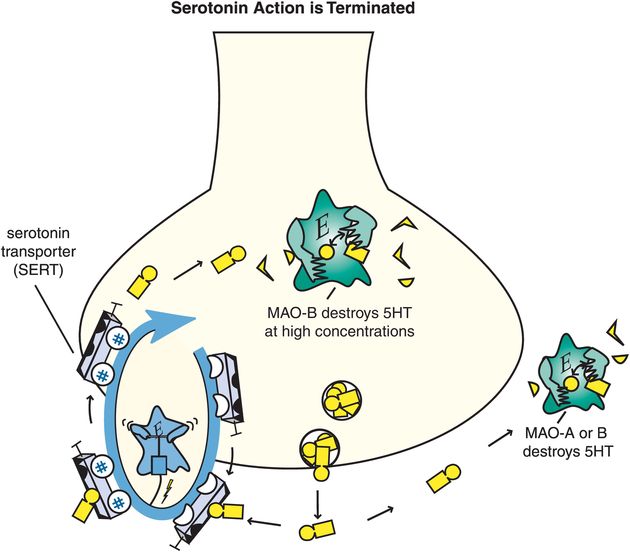 Figure 5-14. Serotonin’s action is terminated. Serotonin (5HT) action is terminated by the enzymes monoamine oxidase A (MAO-A) and MAO-B outside the neuron, and by MAO-B within the neuron when it is present in high concentrations. These enzymes convert serotonin into an inactive metabolite. There is also a presynaptic transport pump selective for serotonin, called the serotonin transporter or SERT, that clears serotonin out of the synapse and back into the presynaptic neuron. 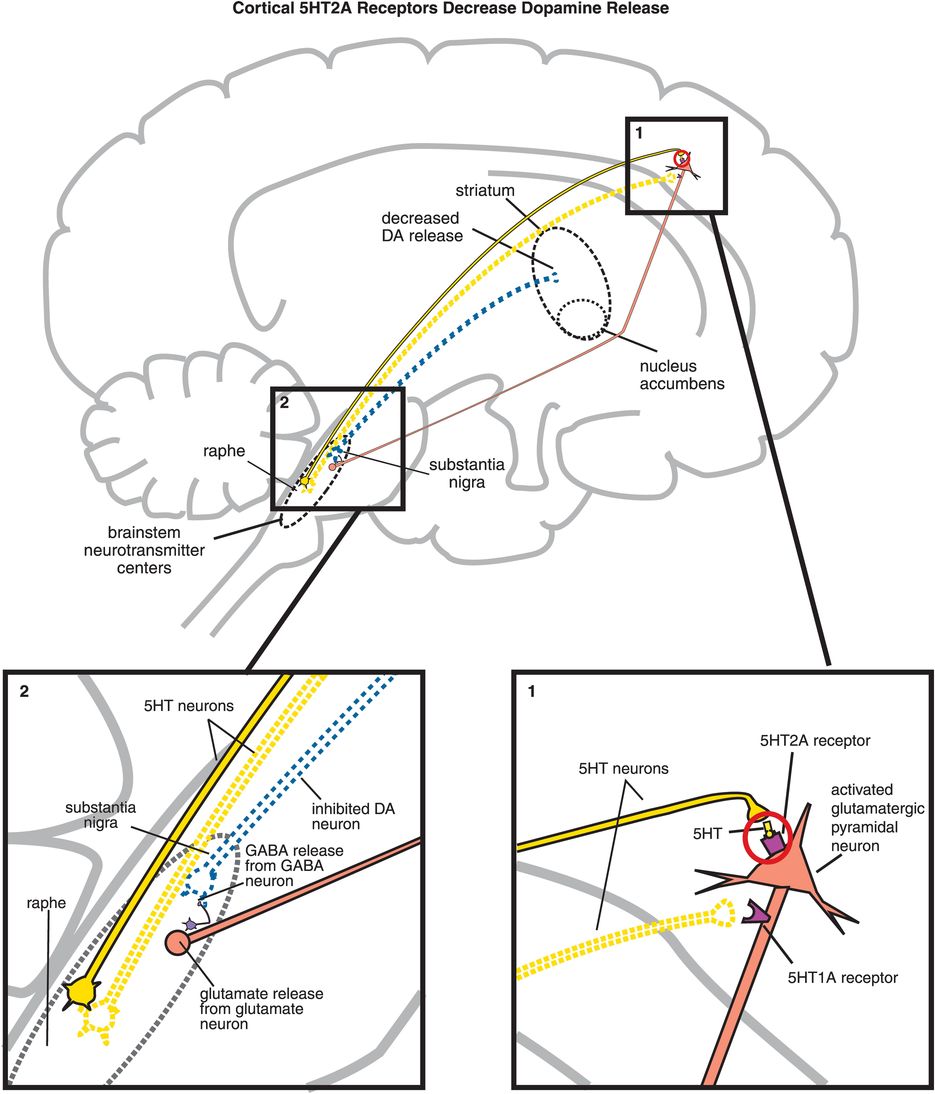 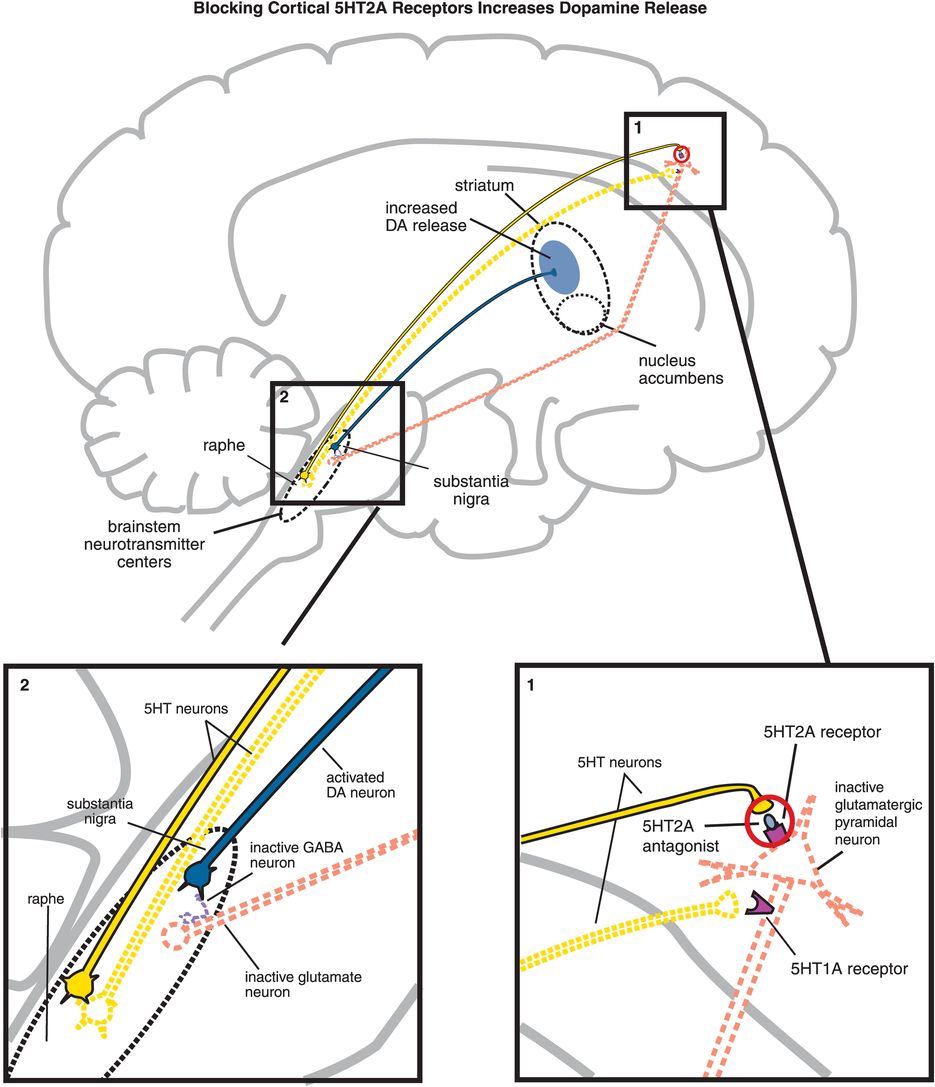 B. Blocking cortical 5HT2A receptors increases dopamine release. (1) If 5HT2A receptors on glutamatergic pyramidal neurons are blocked, then these neurons cannot be activated by serotonin release in the cortex (indicated by the dotted outline of the glutamatergic neuron). (2) If glutamate is not released from glutamatergic pyramidal neurons into the brainstem, then GABA release is not stimulated and in turn cannot inhibit dopamine release from the substantia nigra into the striatum. 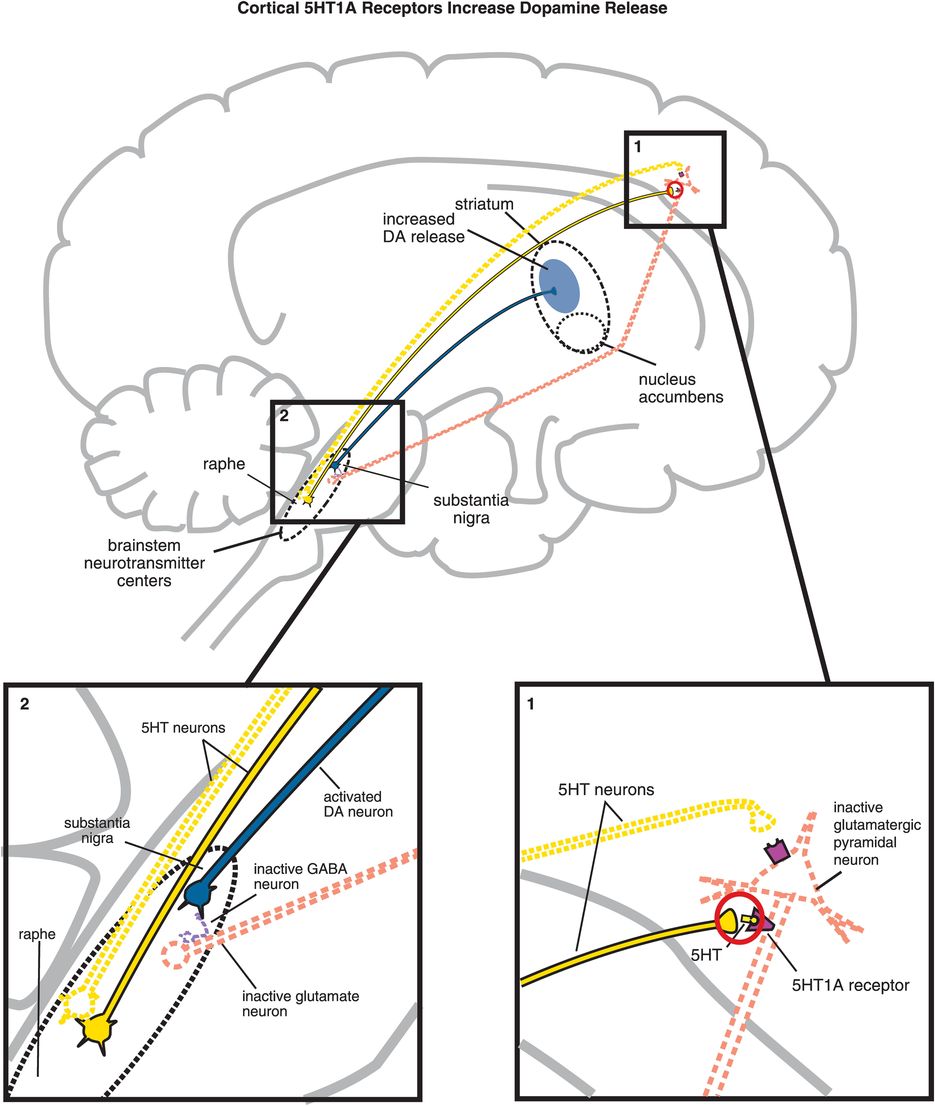 5HT2A receptors are brakes on dopamine release in the striatum

5HT2A antagonism of cortical pyramidal neurons by an atypical antipsychotic interferes with serotonin applying its braking action to dopamine release via 5HT2A receptors (Figure 5-15B, box 1). Thus, 5HT2A antagonism in the cortex hypothetically stimulates downstream dopamine release in the striatum (Figure 5-15B). It does this by reducing glutamate release in the brainstem, which in turn fails to trigger the release of inhibitory GABA at dopamine neurons there (Figure 5-15B, box 2). Release of dopamine from neurons downstream in the striatum is thus disinhibited, which should theoretically mitigate EPS. 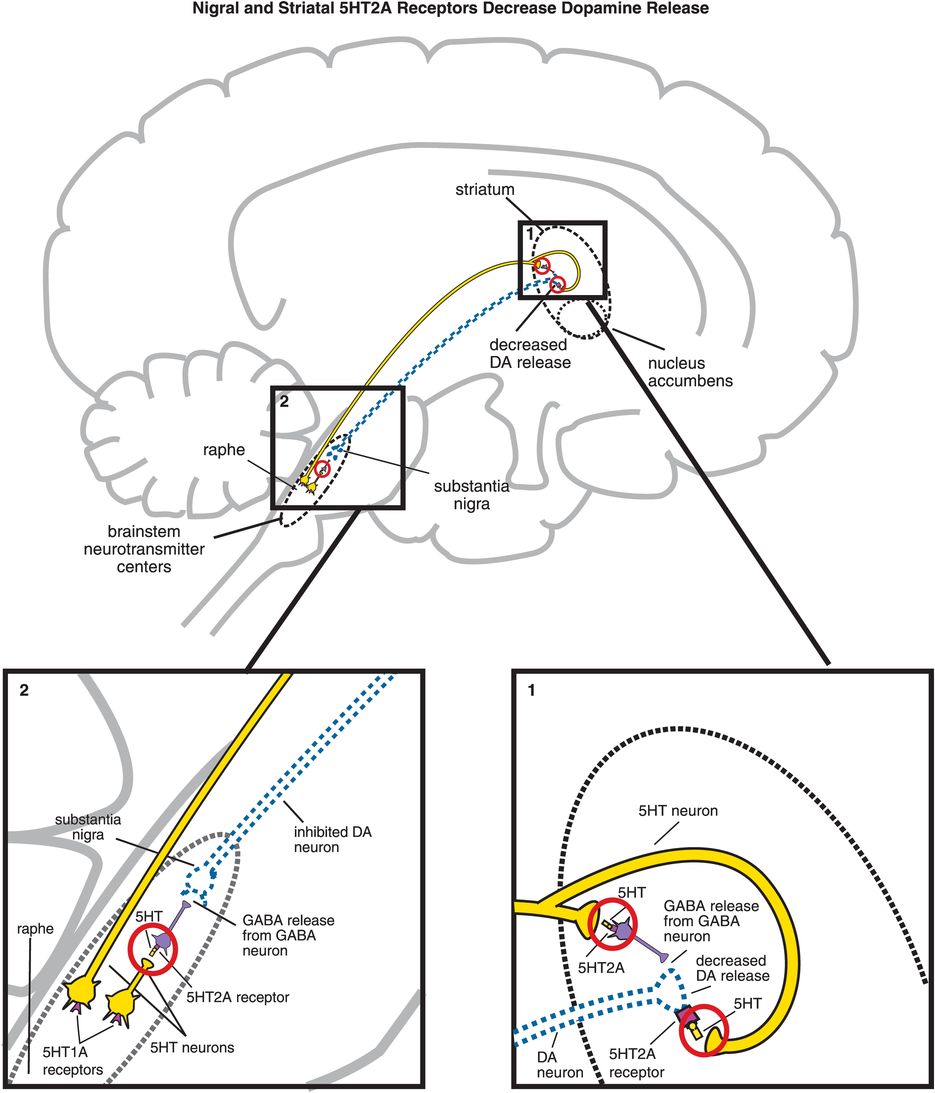