Ammonia (NH3) is a small metabolite that results predominantly from protein and amino acid degradation. It is highly membrane-permeant and readily crosses epithelial barriers in its nonionized form.

Ammonia does not have a physiologic function. However, it is important clinically because it is highly toxic to the nervous system. Because ammonia is being formed constantly from the deamination of amino acids derived from proteins, it is important that mechanisms exist to provide for the timely and efficient disposal of this molecule. The liver is critical for ammonia catabolism because it is the only tissue in which all elements of the urea cycle, also known as the Krebs–Henseleit cycle, are expressed, providing for the conversion of ammonia to urea. Ammonia is also consumed in the synthesis of nonessential amino acids, and in various facets of intermediary metabolism.

Ammonia in the circulation originates in a number of different sites. A diagram showing the major contributors to ammonia levels is shown in Figure 14–1. Note that the liver is efficient in taking up ammonia from the portal blood in health, leaving only approximately 15% to spill over into the systemic circulation (Figure 14–2). 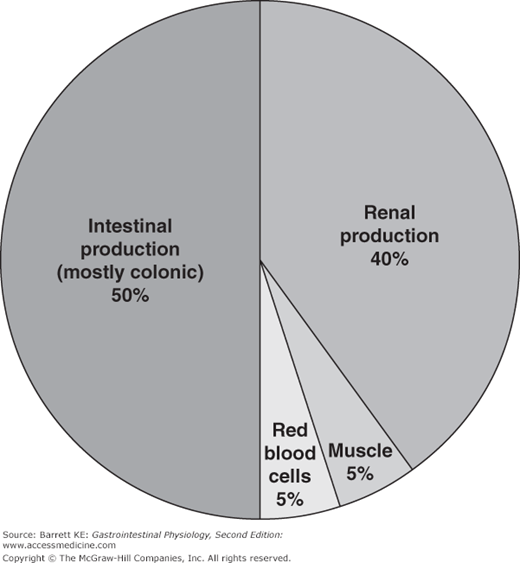 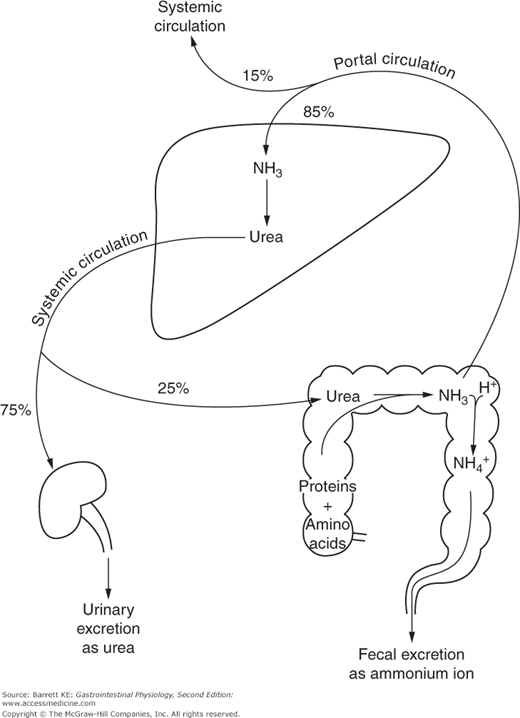 Whole-body ammonia homeostasis in health. The majority of ammonia produced by the body is excreted by the kidneys in the form of urea.

The major contributor to plasma ammonia is the intestine, supplying about 50% of the plasma load. Intestinal ammonia is derived via two major mechanisms. First, ammonia is liberated from urea in the intestinal lumen by enzymes known as ureases. Ureases are not expressed by mammalian cells, but are products of many bacteria, and convert urea to ammonia and carbon dioxide. Indeed, this provides the basis for a common diagnostic test, since H. pylori, which colonizes the gastric lumen and has been identified as a cause of peptic ulcer disease, has a potent urease. Therefore, if patients are given a dose of urea labeled with carbon-13, rapid production of labeled carbon dioxide in the breath is suggestive of infection with this microorganism.