A diagnosis of OSAS is based on the finding of significant respiratory disturbance due to collapse of the upper airway during sleep in the setting of compatible daytime symptomatology. The gold standard for diagnosis of OSAS is the performance of inpatient nocturnal polysomnography (PSG), which provides detailed information on respiration, sleep staging and quality, and a range of other variables including heart rate and rhythm. Sleep-disordered breathing is defined as an apnea-hypopnea index (AHI) of greater than five events per hour as measured by PSG, and can be further classified as mild (AHI 5-15 events per hour), moderate (AHI 15-30 events per hour), or severe (AHI >30 events per hour). Unfortunately, PSG is both resource intensive and time consuming for the patient, and a growing research interest lies in the development and validation of technologies facilitating the ambulatory investigation of subjects with suspected OSAS, but the utility of these methods requires confirmation in large-scale clinical outcome studies. A proposed diagnostic algorithm is presented in Fig. 119-1.

Algorithm for Diagnostic Evaluation of Patient With Suspected OSAS 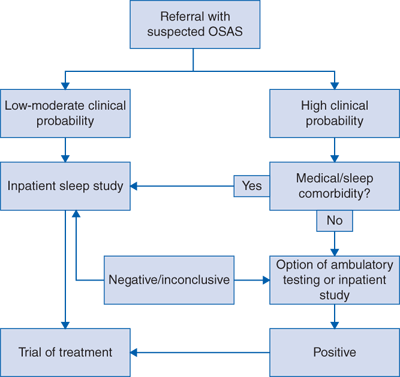 OSAS is a highly prevalent, but underdiagnosed disorder, affecting at least 4% of adult men and 2% of adult women in developed countries. OSAS is intimately and intrinsically linked with obesity, and its prevalence is likely to be increasing as the worldwide obesity epidemic develops. Patients may experience a wide variety of symptoms, ranging from snoring, nocturia, and witnessed apnea during sleep to impaired concentration, depression, and decreased libido. Excessive daytime sleepiness and fatigue are present in approximately 70% of cases. Untreated OSAS leads to reduced quality of life, impaired functional status, and reduced cognitive function. It is significantly associated with the risk of depressive illness, and markedly increases the risk of road traffic accidents.

However, the principal long-term adverse consequence of OSAS is cardiovascular disease, and a growing body of literature suggests untreated severe OSAS leads to significantly increased cardio- and cerebrovascular morbidity and mortality. Particularly strong evidence supports an independent role for OSAS in the genesis of hypertension, above and beyond the effect of traditional risk factors, while a number of studies indicate an independent association with ischemic heart disease, cardiac dysrhythmia, and stroke. Similarly, it appears increasingly likely that OSAS may contribute to the development of metabolic dysfunction, dyslipidemia, and overt diabetes mellitus. A number of contributory factors are thought to underlie cardiometabolic morbidity in OSAS, including the generation of systemic inflammation and oxidative stress by the intermittent hypoxia that characterizes the disorder, and sympathetic excitation accompanying airway obstruction.

There is no evidence at present to suggest that relations of subjects with OSAS need to be assessed in a different fashion to the general population. Similarly, although familial clustering of OSAS occurs, there is no indication for dedicated genetic counseling.